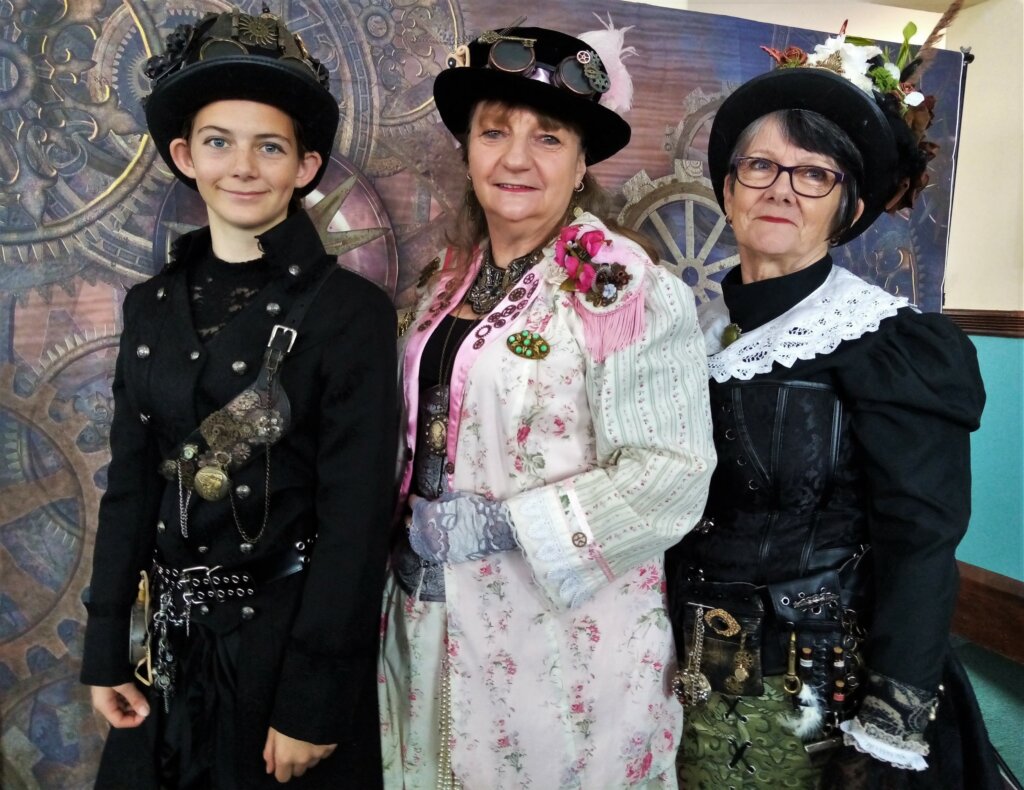 Three of the nine Steampunkers at the Interlock gathering. They are, from left, Natalie Young, Kathryn McGregor, and event organiser, Cambridge’s Jane Brooker. Interlock Waipā, the Cambridge-based initiative launched last year for those living with disabilities, has formalised its status.

The formation of the Trust marks a significant step forward for the group.  It met fortnightly at the start, gathering at the Cambridge Red Cross Hall to offer craft-oriented activities and social connection for teens and adults living with a disability across Waipā.  Aaron said at the time that the idea was simply to bring people together – hence the name ‘interlock’.

“It has become so popular that we fast grew out of the Red Cross Hall and are rapidly outgrowing where we are now [the Alpha Lodge Hall in Bryce St].  We also meet weekly now instead of fortnightly,” he said. “Our numbers have tripled… we really need a permanent home, somewhere where we can have our sessions and not have to pack everything away each time.”

The group does a lot of craft work, which means there are piles of materials moved around as the groups grows.  Students from Cambridge High School are part of regular meetings, and the group has run movie nights. Future plans include offering further support by helping members run micro-businesses via which they can make and sell their goods during the weekly sessions, and perhaps offer teas and café-type meals to seniors.

Those ideas shape what they are looking for, Lois added, meaning they need to look for somewhere that offers the space they need, kitchen and toilet facilities, and storage capacity. They are also looking for more volunteers, and Aaron said the wider community is welcome to join in.

Trustee Harriet Dixon said Interlock’s focus on providing enriched experiences for those with disabilities was invaluable and said she would like to see the group receive funding to continue their work.

“They are working with Cambridge Community House to grow the focus of the group in the desired direction … we have several projects that we are going to get their members involved in.”

The popularity of Interlock was in evidence last Friday when nine Steampunk afficionados from around the district helped Interlock members add a ‘steampunk’ signature to top hats. Their visit was organised by Cambridge’s Jane Brooker, assisted by a crew that included her granddaughter Natalie Young.

Steampunk started in the United States and has an international following. It embraces fashion linked to science fiction, the Industrial Revolution and Victoriana. Long-standing steampunk devotee, Matangi’s Kathryn McGregor said the groups tend to liaise online and gather regularly at workshops and events.