Black walnut among the biggest 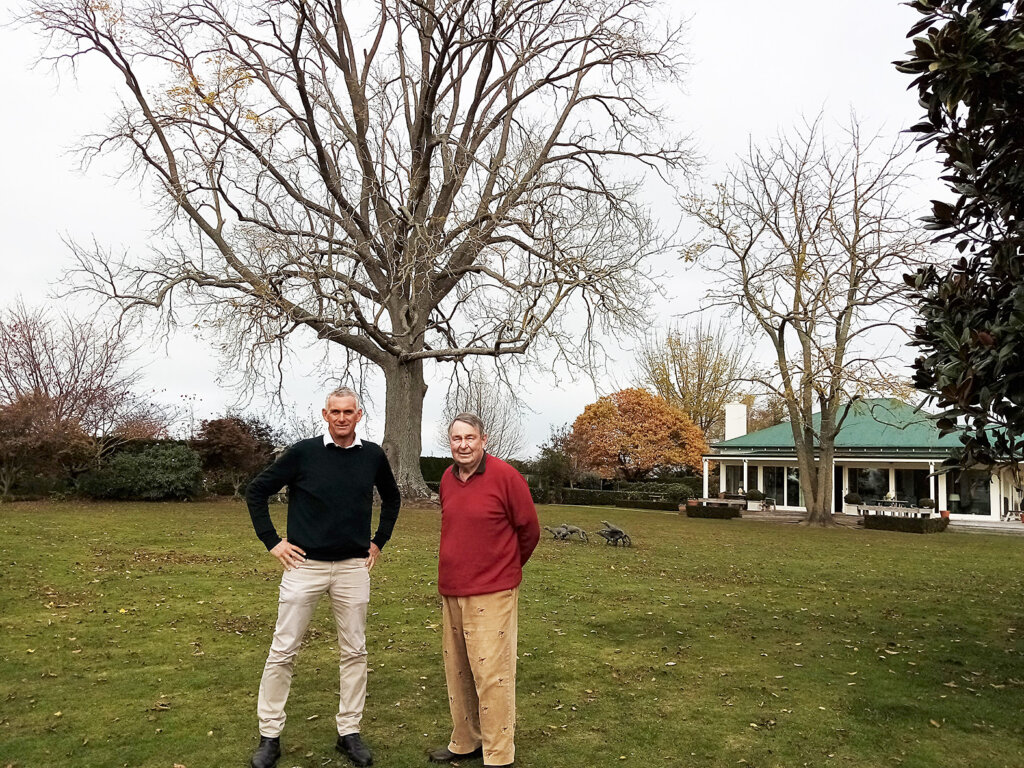 Waipā District Councillor Philip Coles and property owner David Benjamin against the backdrop of the now leafless old walnut tree, and one of its offspring, at right.

A massive black walnut tree – stately even as it stands leafless in its Cambridge garden – is believed to be the largest in New Zealand and the southern hemisphere, and the fourth largest in the world.

This particular specimen of Jurglans nigra, or eastern American black walnut, is on the Kaipaki Rd property that has for 18 years been home to Masey and David Benjamin. It is believed to have been planted there sometime between 1875 and 1880.

Its status has been confirmed by Wintec senior academic, Rob Graham. He has been teaching on Wintec’s Arboriculture programs since 1996 and recently centred a presentation in Coventry, England, on the old walnut tree. Prior to joining Wintec, Rob spent 20 years as an international arborist, working primarily in London.  His extensive experience has seen him speak at numerous international conferences on tree hazard assessment methods, and on the cataloguing of New Zealand’s notable trees.

Rob brought some of his students to measure the black walnut on the Benjamin property. He subsequently advised the couple that the tree’s height was 32m and its crown spread 33m. The ‘dbh measurement’, or diameter at breast height, is 2.04m.

He said the world champion black walnut tree is in Sauvie Island, Oregon, where it stands 34m tall, with a crown spread of 44m and a dbh of 2.62m.

The Benjamins are rightfully proud of their giant companion, although there have been moments when the extensive leaf-fall and exceptionally large kernels dropping like stones have had them pondering its lifespan.  Now, however, it’s formally protected through the Waipā District Council’s tree protection scheme, under which the arboreal needs of trees of historic, botanic and amenity significance – both native and introduced – are taken care of by council staff.
Waipā District Councillor and long-standing friend of the Benjamins, Philip Coles, said there were about 60 protected trees in the district. Waipā District Councillor Philip Coles and property owner David Benjamin appear as tiny figures at the base of the 140-plus year old walnut tree.

The protection status has been a relief for the Benjamins.   Proud as they are, there have been some close shaves that have had David consider wearing a helmet when within its reach.

“We really are tree freaks,” said David. “We planted about 1000 trees on these 17 acres, and planted about 3000 trees, mainly deciduous, on our last farm.”

As for the fruits?  “Well, they’re pretty inedible actually,” he laughed.