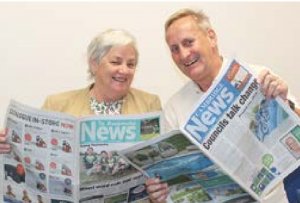 News director Roy Pilott and Good Local’s new senior writer Mary Anne Gill renewed a working relationship this week which dates back to the 1990s at the Waikato Times.

Good Local Media – publishers of the Cambridge News and Te Awamutu News – has teamed up two of the country’s most experienced community newspaper journalists.

The pair boast almost 90 years of industry experience between them.

Gill began her career in sales in the newspaper industry in England in 1978 and subsequently held key roles back home in New Zealand on the now defunct 8 O’clock and Auckland Star newspapers as well as the Whanganui Chronicle and Taranaki Daily News. She was later a newspaper publisher in Taumarunui and went on to become an award winning journalist at the Waikato Times working in both general and sports fields.

Since 2007 she has been prominent in communications, initially with the Waikato District Health Board. She will continue to work for Hamilton based Life Unlimited.

She has also served as a Waikato DHB board member and was last week named as one of the members of the new Cambridge Town Hall Trust.

Pilott, who has edited both the Waikato Times and Taranaki Daily News, began his career at the South Waikato News in 1975. He formed his own Public Relations company in 2015 and has been working with Good Local Media since late 2018.

For Gill, a Waipā resident, the opportunity to return to community newspaper work was “a dream come true”.

Pilott said the pair had a great deal in common, particularly their love for community news – but most of all an enthusiasm for the profession which was as bright as when they first chalked up their first front page lead story.

David Mackenzie was the Waikato Times’ general manager in the the early 2000s when both Pilott and Gill held senior editorial roles.

“I am delighted – we know we already produce the best two newspapers in Waipā and this shows we are committed to making those papers even better for both our readers and advertisers.”