Riding for our RSAs 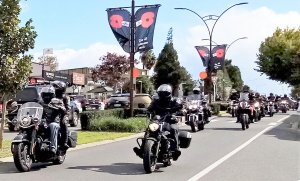 Some of the Tribal Nations Motorcycle Club riders head down Alexandra St towards Cambridge last Saturday after stopping for lunch at the Te Awamutu RSA.

The roar of over 100 motorcycles carrying more than 180 riders and pillion passengers was heard through the region last weekend as the Waikato chapter of the Tribal Nations Motorcycle Club took to the streets to raise funds for Returned and Services’ Association (RSA) clubs.

The R.O.R. (Ride of Respect NZ) event is one of two annual rides done by Tribal Nations in New Zealand.  The other is the R.A.T.S. event (Riders Against Teen Suicide), which will take place again later this year.

Club secretary, Cambridge-based Rod Irvine, said the R.O.R. was based on an international initiative and started in New Zealand in 2016.  “It started in England as a ride of respect for fallen soldiers and has been taken over as an annual event by various motorcycle clubs around New Zealand.”

Tribal Nations MC is a riding and social motorcycle group, headquartered in Ngaruawahia but with nationwide membership. It takes its name from the first nations people, intended to indicate clan, tribe, band, nation, group or community, and has a strong focus on helping spread awareness about suicide, violence and abuse.

Last Saturday’s event included riders from around the country. It started in Ngaruawahia, stopped in Te Awamutu for lunch, proceeded through Cambridge and Morrinsville, visiting RSAs in each town.

Rod, who joined the club in 2016, said funds raised through the event would be distributed among local RSAs.