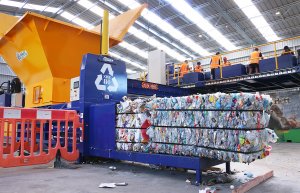 Waipā recycling centre has been tipped up by rogue recyclers

Waipā District Council has imposed a three-strike rule on rogue dumpers who have sabotaged the community’s recycling centre.

More than 25 properties have been told their recycling services are suspended because they abused the collection process and the council says some breaches were deliberate.

Waipā District Council operations team leader Jennifer Braithwaite said the suspensions were imposed where there had been three instances of contaminated items being found which would have spoiled the recycling process.

They were found during routine bin inspections.

“We are facing a very serious contamination issue at the moment which is costing Council and ratepayers a significant amount of money,” Jennifer Braithwaite said.

“There are people in our communities who are deliberately putting contamination into their wheelie bins which has resulted in almost half of the district’s recycling going to landfill.”

It cost around $40,000 in January for Council contractors to collect, sort and dispose of the contamination – an increase from around $30,000 late last year.

Braithwaite said bin inspections were the most effective way to tackle contamination and find those who were causing disruption to the service.

“Until we can get this issue under control, we will continue to suspend recycling services if necessary and crack down on those who try to flout the recycling rules.”

Braithwaite said a service would only be suspended from a property for instances of severe contamination.

“There is a big difference between someone accidentally putting in a #4 plastic container into their recycling bin and putting dirty nappies or old clothes in there.

“In the first instance, we would take an educative approach to deal with the issue. However, the latter is very clearly non-recyclable and will result in the suspension of a service.”

Those who have had their service suspended are required to sign a pledge, agreeing to only put clean and correct recycling into their bins which will be considered by Council staff.

Properties who have their recycling service reinstated will be added to a ‘red list’ and their bins checked prior to any future collections.

“We are observing what has worked for other councils and considering a number of other options to try to reduce contamination.

“Ultimately however, we need the help of all residents to deal with this. I strongly encourage anyone to report instances of people putting contamination into their recycling bins and we will investigate.”

Residents can report instances of contamination by contacting the council on 0800 924 723).

For more information on recycling go to www.waipadc.govt.nz/recycling.