Our fishing columnist Ben Carey took these shots of hailstones that hit his place just north of Te Awamutu just after 2pm on November 25. “A massive wind gust barrelled through the property,” he said. “I’ve experienced my fair share of atrocious weather fishing down in the Southern Ocean, so I went outside to take a look. First the wind, then the shape and size of the hailstones caught my attention … they richoched off the roof down onto the grass.”

The late November weather bomb that hit Waipā left businesses in Te Awamutu flooded and had rural residents picking up the pieces after tornadoes swept through the region.

Heavy rain and hail hit Waipā in the early afternoon of Wednesday November 25.  Stormwater drains were quickly overwhelmed, with the rapid build-up of water causing flooding to numerous businesses in town.  The sudden deluge weighed down roofs and overwhelmed gutters, with some outlets reporting water pouring down the walls and parts of their ceilings collapsing.

Several businesses reported ankle deep water and were not able to re-open until the Friday.

Of the 15 calls logged by the Te Awamutu Voluntary Fire Brigade between 2pm and 8pm on November 25, all but three were for flooding.  Te Awamutu Deputy Chief Fire Officer Karl Tutty said there were about 10 additional calls attended by Cambridge or Hamilton brigades that were not on that log.

“Most were in Te Awamutu’s CBD,” he said, “from Rewi St/ St Mary’s Ave in the west and Park Rd in the east.  Most of the calls were for surface flooding.” Another of Ben Smith’s hailstones

Robert Harris Café was one of those for whom the flooding meant a day-and-a-half of business lost. Owner Anita Zhou said: “It was really bad … water came down from the roof over the seating area. We had to use buckets to catch the water.”

Murray Green of Paper Plus Te Awamutu said water came via the roof/ceiling in a couple of places. Particularly badly impacted was the Toyworld section’s front window. “That got soaked and the water ran out onto the shop floor. A number of items in the window display were damaged. Another area where stock was damaged was in the storeroom,” he said, adding that many other outlets were far worse off.

Nearby businesses also struggled with uncontrollable flooding, while other outlets in Alexandra St also recorded damage.  Joy’s Bar and Bistro had water pour in from the rear and called the fire brigade. After getting their carpets dried out, they re-opened fully later in the week.

At the other end of Alexandra St, CBR – a Surf and Skate outlet – found themselves ankle deep in water than rushed through the back door of the shop from Teasdale St, affecting not only stock on the floor, but also items in their stock room.

Mavis and Mick Shoes reckon they got off lightly. “We weren’t as badly affected as other businesses in town,” said owner Mikala Walshe.  “We had a stack of carpet tiles we had recently taken up during a renovation.  The staff there at the time grabbed those and mopped up what water did come in. I know others were a lot worse off … the drains just couldn’t cope.”

Jean McKenzie, owner/tutor at Impact Tutoring in Market St was grateful to a group of young farmers from Dairy NZ who were at the education hub for their ongoing course when the storm hit.

“They leapt into action and moved, shifted things and helped in both the areas affected.  Without their help, there is no way I would have saved what I did from water damage.”

Jean also commended their landlords, the Reymers.  “They and their family swung into action to help with the water and the damage. With my family, too, we were able to recover enough in a short period of time to continue tutoring as usual.  I have never seen such a rain event before … it was literally parallel to the ground.”

Those outside town were also hit by the storm but had the added disadvantage of tornado damage. The blown-out door of John Hansen’s aircraft hangar which took almost a direct hit from a tornado.

Leah Jones in Ray Rd had trees downed on her property, but said her in-laws were worse off as the tornado seemed to pass over their land. “They had quite a bit of damage, with broken windows and the corner of a roof lifted,” she said.  “It picked up their BBQ and tossed it about 10m into a fence. There were also heaps of trees knocked down.”

Leah said her neighbour across the road had their pump shed flattened. 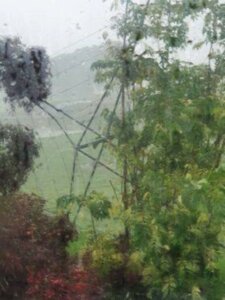 Deputy Mayor Liz Stolwyk’s washline was blown into a tree by a late-afternoon tornado in Ōhaupō.

John Hansen’s Budden Rd property is home to his aircraft hangar which was hit by the tornado. He was working on one of the aircraft at the time when he heard what sounded like a freight train coming through. “There was a lot of thunder and lightning, and heavy rain … all I could hear was this massive roar. I went upstairs to look out and saw the tornado coming across the neighbour’s paddock. There were branches flying everywhere.”

John ran to find himself a safe position. “I was about three metres from the door when the ranch slider just got sucked out and the frame disintegrated. The whole building was shaking … it was very noisy.”

Other doors in the hangar were affected and some of the clear light windows on the arc of the curved building were sucked out.  “It all happened within seconds. Then it went up a hill and through a row of old pines. There were uprooted trees and wood everywhere. It took all the power lines off the poles.”

Waipa’s Deputy Mayor Liz Stolwyk was listening to Mayor Jim Mylchreest give his address during that evening’s Friends of Council gathering at Lake Karapiro when she received a texted image with an alarming message.  An early evening tornado had swept through the family’s Ōhaupō property, downing three of her trees and blowing her washline into another tree.

“I arrived home after dark,” she said. “I decided to walk past it all, deal with it in the morning and have a cup of tea instead!”