The gun flash signaled during the performance of Tchaikovsky’s 1812 overture. Photo: Richard Lummus

Cambridge paid its respects to the fallen during two days of well-attended commemorative Armistice Day events that were often threatened, but not beaten, by changeable weather.

In the 20 years since it started, Armistice in Cambridge has become one of the country’s largest events of its kind. It commemorates the anniversary of the signing at 11am on November 11, 1918, of the Armistice between the Allied nations and Germany, signalling an end to World War One.

Cambridge marks the commemoration with an official memorial ceremony involving the Cambridge Cenotaph on Remembrance Sunday, and a historically-focused display at Lake Karapiro, involving a range of family friendly activities including archery, airsoft target shooting, WW2 jeep rides, and more. Scores of military vehicles from the last century were on display again this year, and there was a sunset performance of Tchaikovsky’s 1812 Overture by the Cambridge Brass Band. 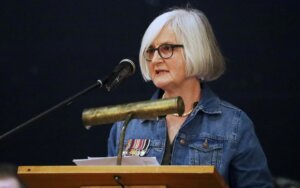 Waipa’s Deputy Mayor and Mighty River Domain manager Liz Stolwyk said it had been great to see so many families at Armistice in Cambridge this year. “The children’s activities proved popular. The military horses are always a favourite, and the military re-enactments were very impressive.”

This year marks the 20th anniversary of Armistice in Cambridge.  In her address, Cambridge Community Board chairperson Sue Milner said many of those who served in WW1, and their families, were forever changed by the war.

Most Cambridge families were touched by events at the time. “Some 12,000 New Zealanders died at the Western Front during WW1 … we remember them, and those who came home and helped shape the country.  We owe it to them, and to those who fought in later wars, to remember their legacy,” she said. Taupō MP Louise Upston acknowledged Waipā District Mayor Jim Mylchreest, who was at the service, for continuing to make sure that Armistice Day remained part of the fabric of Cambridge and that there were public opportunities in place for people to commemorate those connections.

Wreaths were initially laid inside the hall because of wet weather but were later relaid at the Cenotaph by cadets.  The service was officiated by Rev Malcolm French and the parade commander was Staff Sergeant Richard Plas (ret).

The skilful handing of the guard by cadets from a range of different units was a testimony to their training, said organiser Paul Murphy. “They had never worked together before the weekend and had to cover both fine and wet weather drills. They performed as if they had done it 100 times.”