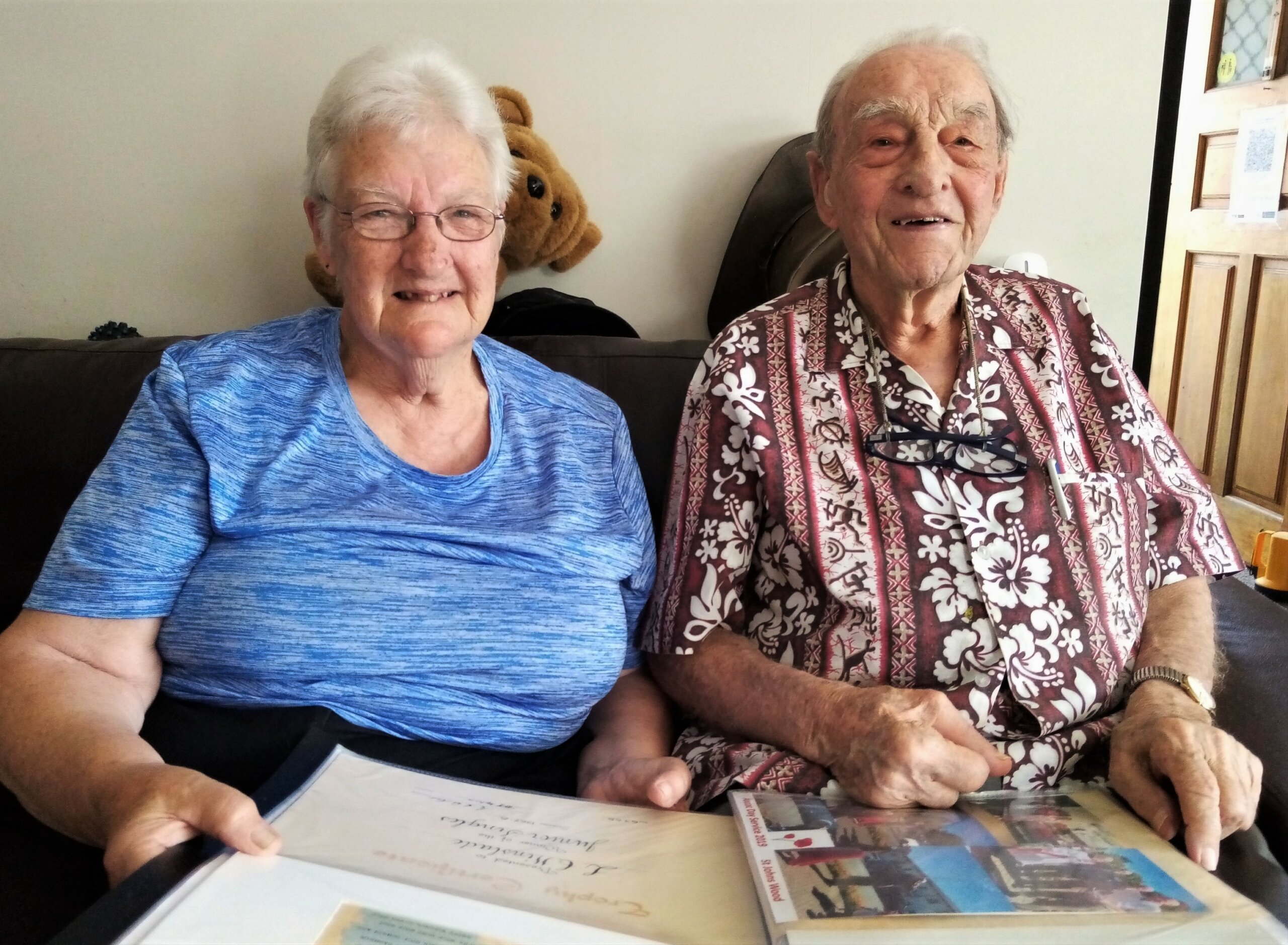 When Alison Hucke’s dad moved into a cottage directly opposite hers last month, the pair became a rare dad-and-daughter duo living at Cambridge Resthaven.

Alison has been there three-and-a-half years.  Dad Les Winslade, QSM, moved in on October 20, shifting from Taupō’s St John’s Wood where he was given a memorable farewell/100th birthday party that included Taupō District Mayor David Trewavas.

Files full of certificates and other paperwork, and a book written of his life at age 80 – one he intends to update – tell the story of a man given to helping others.  It’s a gene that has passed down the family line, with Alison demonstrating much the same affinity for service.

Les was awarded the Queen’s Service Medal in June 2009 for community service.  He is also the recipient of a Paul Harris Award through Rotary International and was declared a Melvin Jones Fellow through Lions International. One of those would be a rare honour, but to achieve both is remarkable.

Born in Birkenhead, England, Les turned 100 on September 28.  The family migrated to New Zealand in 1926, settling in Lower Hutt where Les joined the Scouts at 12 and helped raise money for his group by making soap. He left school at 15, becoming a telegraph boy and postman before WWII saw him report to Trentham to work on the telephone exchange. He later joined the RNZAF, serving as a wireless operator. A few years after the war, he joined National Mutual where he remained for most of his working life.

Helping people surmount life’s difficulties became his mantra. On one occasion Les lent an employee the balance of a deposit to purchase his first home, others stayed with him rent-free while saving to buy a home.

After moving south, he became a foundation member of the Dunedin Budget Advisory Service. Les and his wife Barbara, who died in 2012, moved to Taupō in 1983, where Les joined the Taupō Pakeke Lions and set up the TaupōNeighbourhood Watch. He got involved with the Taupō Hospital and Health Society, helping raise more than $2 million for medical improvements in the district and spearheading fundraising for the Turangi Community Health Centre which opened in 2008. He was also behind the introduction of a geothermal heating system for Taupō Hospital and initiated a Lions traffic survey in support of the council’s push for the arterial bypass.  His efforts saved the council thousands of dollars and won him multiple plaudits.

Alison, who is Friends of Resthaven secretary, also has an impressive community record. She was an itinerant teacher for the Red Cross and started the Emergency Welfare and Rescue team in Hamilton some years back.  She was secretary for the inaugural fundraising committee behind the establishment of the Waikato Rescue helicopter and has lengthy involvement in numerous other organisations, including Guides NZ.

Both she and Les are keen gardeners. Alison has been co-ordinator of Resthaven’s community garden for over three years, and Les helped establish the gardens at his old spot in Taupō.