Just a dedicated follower of fashion… 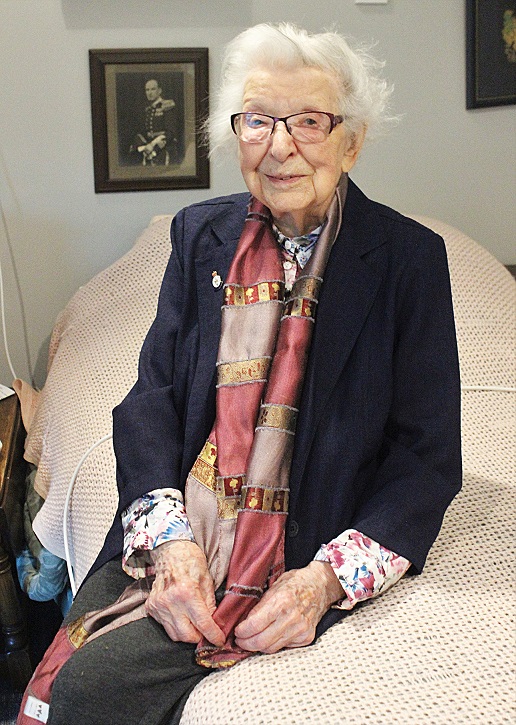 Her grandfather lived to 101 – and yesterday she went one better in Cambridge and celebrated her 102nd birthday.

Originally from Kent, in England, Kathleen has lived in Cambridge since the 1980s.

She has been at the Moxon Centre for a little over a year.

When the News visited, Kathleen’s cousin Clare Jackson had also popped in.

“When I moved out to New Zealand, Clare’s mother was the only relative I had here,” Kathleen explained.

“My husband Peter couldn’t handle the cold English winters any longer.” she said.

Kathleen and Peter did not have any children.

So, what’s her secret to a long life?

Clare says her cousin is “an amazing lady”.

“She’s brilliantly intelligent – no matter what we’re having a conversation about, be it the arts, culture or science, Kathleen is always so well informed.

Clare said she’s sure a good sense of humour also plays a role.

“You can always have a laugh with Kathleen.”

Kathleen proudly displayed the pin she received in recognition of her service in the Women’s Royal Naval Service, the women’s branch of the Royal Navy, where she was a cipher officer during WWII.

Somewhat of a social butterfly, post lock-down Kathleen can often be seen filling her days walking the Moxon Centre hallways and catching up with fellow residents.

Kathleen said she was an avid reader in years past, which helped keep her mind sharp – she also has a passion for music.

“I do love it – I used to play the piano – but very indifferently might I add.”.

“Every time I visit I hear another fascinating story from our family heritage,” Clare said.

“There’s so much I love about Kathleen.”

Kathleen Marking was born on a  Monday and World War 1 was still raging  – on that day four Zeppelin airships dropped bombs in the Midlands and North East England – the last German air raid of the war. Less than 100 days after Kathleen was born, the war was over. In her future home in New Zealand, the population was just over 1.1 million, William Massey was Prime Minister and 6pm closing of pubs was made permanent fixture.