Ask not for whom the bell tolls in Cambridge – because since the start of lockdown the answer has been for no one.

But now thanks to a group of Council parks and reserves team members – among them clock operator Jeff Masters – the hands of time are ticking in town once again.

And there’s perhaps one super fan who couldn’t be happier about it.

When parks and reserves staff did appear on site last Friday to get the hands ticking and the bells chiming, two-and-a-half-year-old Lachlan Rusk was there to watch.

“Oh for sure,” his grandmother Barbara Scott, who brought him along for a look, told the News.

“He’s really excited. He knows everything about it and absolutely loves the clock. Before lockdown, every time we came to Cambridge we’d have to stop here and have a look.

“He’s been missing hearing it chime.” 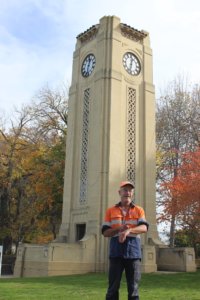 Barbara’s husband Graeme said Lachlan was such a fan and already had a wealth of knowledge, despite his young age.

“He can even tell you that the name for the study of time is horology,” Barbara said.

And so, when a brief meeting between Lachlan and Jeff occurred after the clock was once again wound, Lachlan couldn’t have been happier.

Barbara suspects there might be a career in a field like engineering ahead for her young grandson, because he’s already very technically minded.

“If you give him your phone he’ll happily readjust the settings for you, for free,” she smiled.

The News reported on April 3 – in the early stages of alert level 4 lockdown – that the clock’s hands were stopped by Council staff – leaving it on 12 o’clock until they could safely access its inner workings once again.

Jeff told the News the art of getting the clock chiming again was a fine one, because it runs on a pendulum.

“It’s a matter of getting it swinging just right,” he said, adding there was only a handful of clocks in the country which run in such a way.

The Cambridge town clock is more than 100 years old – it was rmoved from its perch atop the old Post Office on Victoria St to its current home opposite the town square in the 1930s after it was damaged in the 1931 Napier earthquake.