Celebrations to mark fact Te Miro School is 100 this year have been postponed following Government directives around efforts to limit the spread of COVID-19 coronavirus.

The Te Miro School and District Centenary committee had been organising a celebration this Saturday, March 21 but committee spokesperson Matt Keyte confirmed on Tuesday they had made the “very difficult decision” to postpone the Te Miro Centenary until March 6 next year. 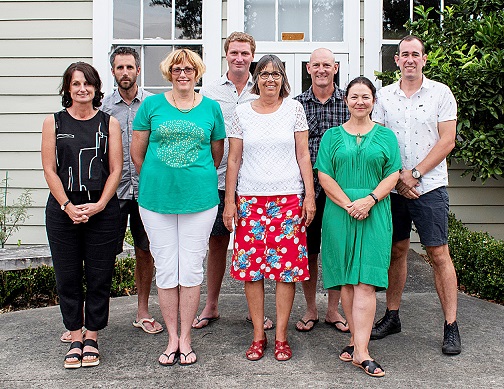 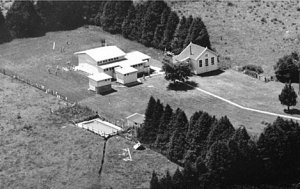 Te Miro School pictured from above, circa 1955

He said they wanted to follow best practice advice, but the decision still hadn’t been an easy one – the celebrations had been planned for more than two years.

Several events had been planned throughout the day to mark the occasion and more than 300 people had said they were planning to attend.

Long after his lessons were written on chalk boards there, Matt has Te Miro – and Te Miro School – written in his DNA.

He was the third generation of his family to attend the school – his grandfather and father attended before him.
Additionally, his great grandfather – Frank Keyte – was a returned World War One soldier who lived in Te Miro.

Today, that makes Matt’s children Thomas and Jacob the fifth generation of the family to live in Te Miro.
“I love Te Miro School,” Matt said.

“Not only just because of the beautiful rural setting, but I think for me what I really thought was special about it when I went there was the close-knit bond between students of all ages.

“I think that camaraderie is something that actually, when it comes to Te Miro, spreads wider than just the school and into the district as a whole.”

Te Miro School opened on March 8, 1920 with a roll of 10 children. The following day, a further six children started at the school – boosting overall pupil numbers to 16.

By comparison, that year Cambridge’s entire population was 3472 people.

Today, Te Miro School has 27 students on its roll – aged from years one to eight – and Principal Michaela Phillips said the school had many amazing assets.

She said a purposeful approach to holistic learning was important to them.

“Really, we’re like one big family, it’s so special.”

The pages of history tell us the Te Miro district has its beginnings when the Government purchased James Taylor’s 12,000 acre Te Miro property for soldier settlement.

Frank Keyte, and the other veterans, settled in Te Miro as part of the Discharged Soldiers Settlement Act, established to put returned soldiers on to farms.

Newspaper reports of the day document the first soldier’s struggles in Te Miro.

With 30 settlers originally, 20 evacuated and left vacant sections – with the depression of 1921, plagues of rabbits and deer, poor road access, high costs of timber and wire being some of the factors that made for hard times for the soldier farmers.

Despite this, the settlers who stayed were determined to battle on. Today there are four families in Te Miro who are descendants of WWI soldier settlers and two that have been in Te Miro since before the war.

Te Miro…
– Te Miro was home to renown Ngati Haua‘s Wiremu Tamihana, who was largely responsible for the establishment of the Maori King Movement and King Tawhiao, the second Maori King established his parliament there.

–       The government purchased the Thornton family homestead, a ‘two storied mansion’ built in 1890.

–       A Maori newspaper was published there during the years of 1891 and 1902 which contained reports of Tawhiao’s meetings, discussions with Government and gazette notices.  The printing press is on display in the Cambridge Museum.

–       School transport began for students in 1946 when the sole teacher, Mr A Thompson collected students from around the district in his Cadillac.

–       Te Miro stayed a sole charge school until 1951 when a shelter shed was converted into a classroom.  A proper junior block was built in 1954.

–       Te Miro School has had 47 principals or sole teachers in its 100 years. In total, the school has employed 80 teaching staff over the years.