Tree to light up each night this month Friday saw the first of 33 nights of Christmas glow in the CBD with the lighting of the Cambridge Community Christmas Tree, captured here over a time lapse by Michael Jeans.

Cambridge officially has its own public Christmas tree, put together through a community effort and lit up for the first time over the first weekend of December, captured by Cambridge photographer Michael Jeans.

The Christmas lights, co-funded by the Cambridge Community Board (CCB) and Cambridge Lions, will shine each night from 9pm to midnight, right through to the new year, on one of the long-standing fir trees on Victoria Square.

Cambridge Community Board chair Sue Milner said the project was a great demonstration of the community working together, and a “fitting end to a magical year for Cambridge”, after being crowned ‘Most Beautiful Large Town’ at the Keep New Zealand Beautiful Awards.

A few dozen people turned out for the first light-up, along with some of the main organisers behind the project, former CCB members Philip Coles, Julie Epps and Mike Pettit, and chairperson Milner.

“This year we decided to have no fan-fair, but we’ll hopefully grow it more each year,” said Philip Coles. “We’ve got some ideas.

“We would like to get the community involved to do further decorations, after all it is the Cambridge Community Christmas Tree, and that can help contribute towards defending the ‘Most Beautiful Town’ award.” 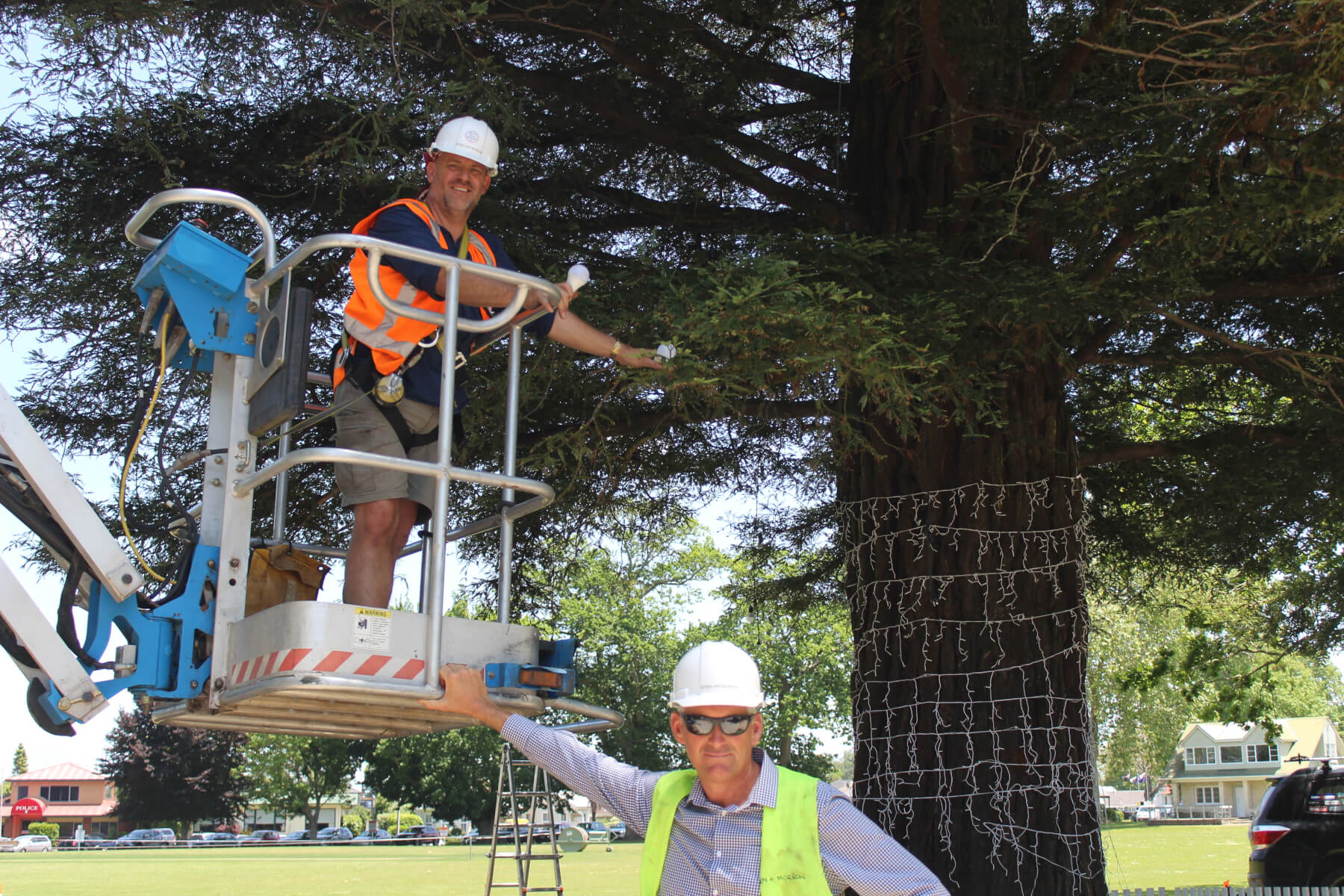 Ron Grim from Steen and Morrow installs the Christmas lights on the Cambridge Community Christmas Tree, overseen by one of the project organisers Philip Coles.

Coles said there were lots of people to thank, namely, Ron Grim from Steen and Morrow for installing the lights, Cambridge Hire and Waipa Networks for the tree hoist, Mr Davidson and the Year 10 woodwork class at Cambridge High for making the star, Cambridge Resene for providing the star paint, the Cambridge Cricket Club for the fencing around the base, the Cambridge Lions and CCB for cofounding the project, Sally Sheedy from Waipa District Council, and Waipa Civil.