Nearly 200 makeshift soldiers will bring history to life at Armistice in Cambridge next month.

Donning uniforms from British paratroopers to Anzac soldiers, reenactors will play out some of history’s most iconic battles, from World War II to much older wars from years gone by.

This year’s event over November 9 and 10 will feature battles from the Boer War, the Russian civil war, the battle of Monte Cassino, battles from the eastern front, the New Zealand Land Wars and even Romans versus Vikings.

“It’s remembrance, it’s keeping history alive, and it’s a hell of a lot of fun,” said Greg Thomas, a Cambridge resident and organizer of the historic battles at Armistice in Cambridge.

He describes the 200-odd fanatics who travel from around the country to take part in the re-enactments as “nerdy, history loving people” who are “reasonably eccentric”.

“We are geeks, we’re nerds, we like to dress up and pretend we’re in a different time period. But somebody’s got to keep history alive.

“Computer games and historical movies quite often get things wrong, so it’s our challenge to make sure history is exact.”

Thomas has been involved battle re-enactments at Armistice in Cambridge for the last four years, and has since recruited his teenage son Avon Thomas-Lee into the ranks.

Asked why he gets involved too, the 14-year-old said it’s fun, and, “why not”. Several more teenagers take part in the local re-enactments, adding to the authenticity of soldiers from history.

“They were largely all young guys. In fact the youngest casualty in World War 1 was 14 years and nine months old,” said Thomas. “Usually we make them wait until 16, but I just take him along anyway since I’m running it!” The pair have set the stage for battle practice digging trenches in a paddock outside the Tauwhare Military Museum.

Anyone could get involved in battle re-enacting, he said, females included.

Spots were still open to get involved in this year’s battle re-enactments – just visit the Armistice in Cambridge Facebook page to get in touch, Craig said.

“And if they turn up on the day I’ll have spare uniforms sitting around too. They’d go as a medic, because we don’t know who they are so they’re not going to be given a gun! But we’ll dress them as a medic or a stretcher bearer.

“It’s great, for a weekend you’re transporting yourself back to living in a different time period. It’s living history, it’s fun, it’s enjoyable, you get to hang out with like-minded people, and the public get to see it too.”

What is Armistice in Cambridge? 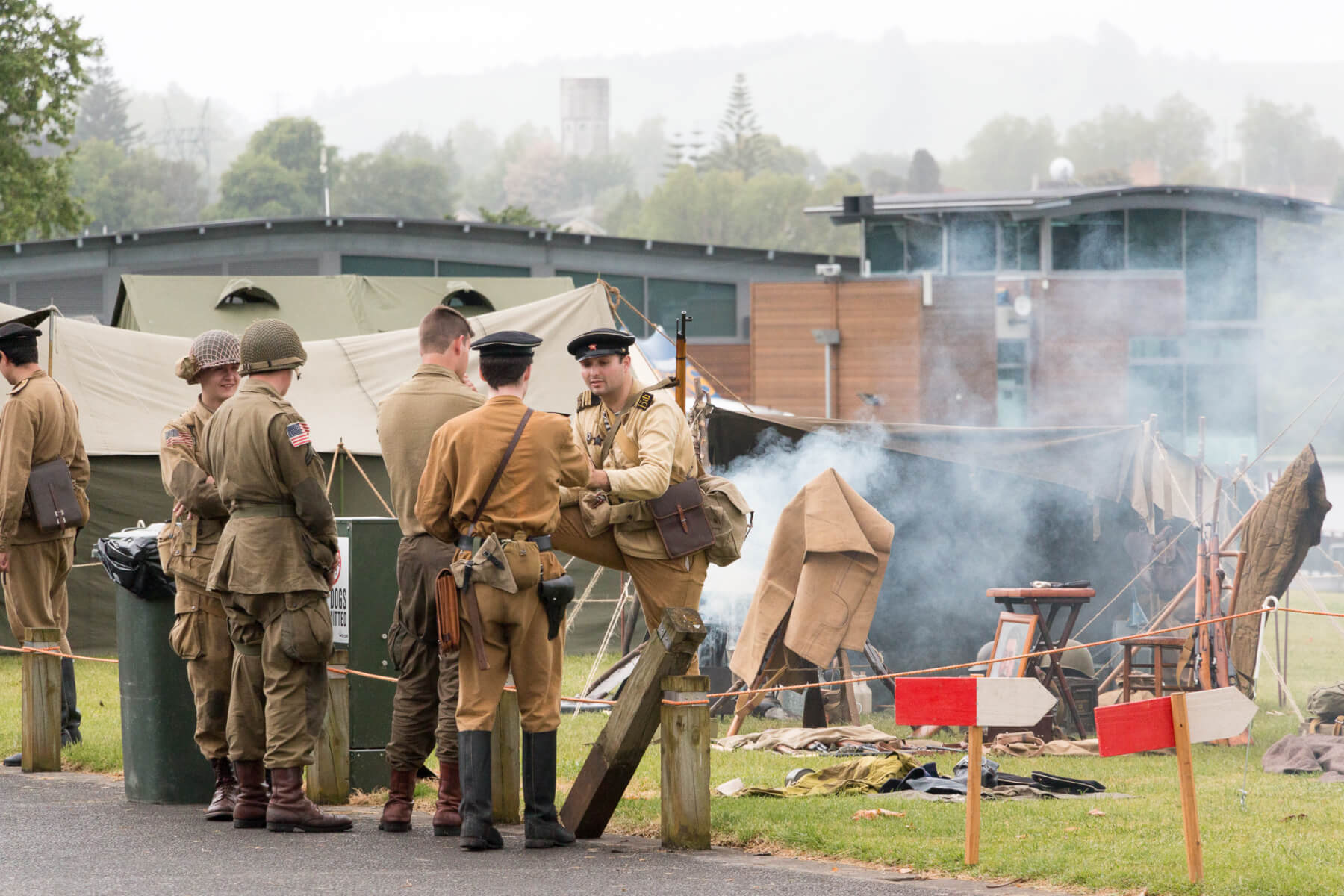 A “living encampment” at Armistice in Cambridge 2018.

Held in Cambridge for the past two decades, including the last four years at Karapiro, Armistice in Cambridge sees one hundred military vehicles and a plethora of military memorabilia assemble at the Mighty River Domain for a weekend of historical remembrance – New Zealand’s largest celebration of military heritage.