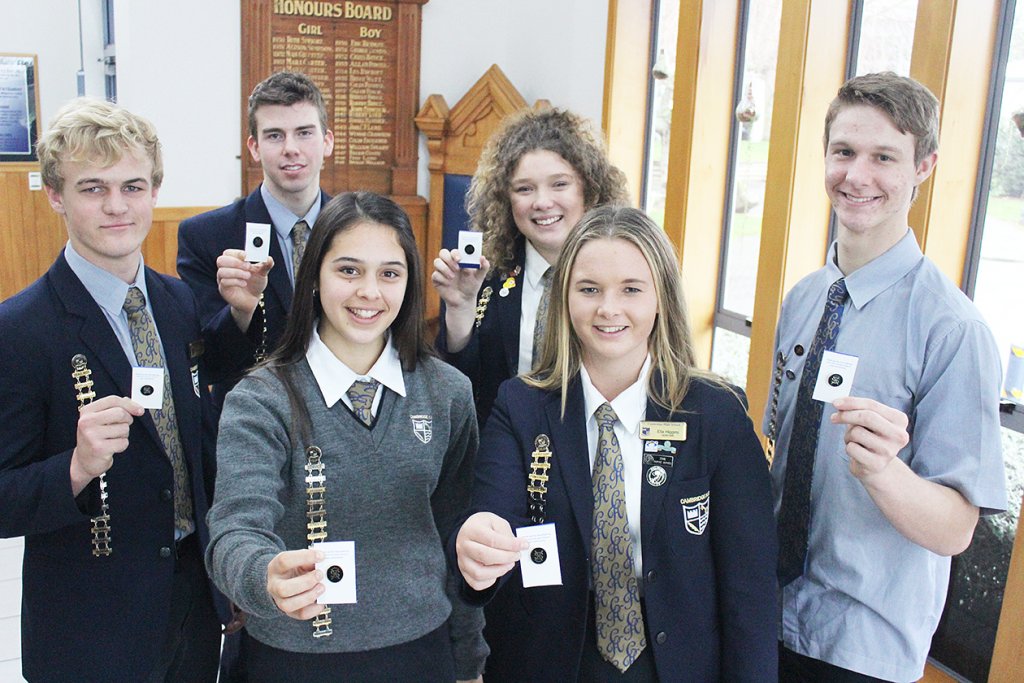 The initiative records and recognizes student volunteer work, awarding bronze, silver and gold pins after a certain number of hours.

Cambridge High School is currently trialing the programme with around 70 senior students, and after just three months they’ve accumulated over 3000 hours between them.

Taasha Connon and Ella Higgins were recently recognized as the school’s first students to clock 500 volunteer hours, each earning a gold award, and are believed to be among the first students in the country to achieve gold. Fire more students – Matthew McHugh, Liam Peatrie, Charlotte Mitchell, Molly Oldershaw and Kieran Leng – were also awarded silver pins for 250 hours.

“It’s just fantastic what they’re going, and I think the community need to see our youth in that light,” said deputy principal John McDonnell, the school’s SVA coordinator. “It amazes me the vast number of things they do in the community off their own back. There’s been so many different things, and they just get up and do it.

“And I think the SVA Awards are really important in recognizing that. It’s a real advantage when it comes to a prospective job in future, to show they’ve actually contributed to their community.”

Both Taasha and Ella said they didn’t volunteer for the kudos, but simply for the good will.

“I just personally love volunteering,” said Ella, the school’s Head Girl, who started out with Surf Life Saving in Waihi and branched out to volunteer as a netball umpire. “It’s really satisfying, to be able to see that you’re having an influence on the younger people you work with,” she said.

For Taasha, a netball coach and umpire for netball and touch, the idea wasn’t just to volunteer, “it’s something you enjoy as well”, she said. “And because a lot of people in the community have taught me how to play sport, and I want to share my knowledge with people too, like I’m passing it on to the next person.”

Molly, Kieran and Liam have kept busy volunteering in a weekly programme at Cambridge Middle School, and Head Boy Matthew McHugh is deeply involved with school rugby – both refereeing and coaching for various teams, as well as Surf Life Saving.

For Charlotte Mitchell – a volunteer for the Aotearoa Youth Declaration’s international relations group, a national leader with SADD (Students Against Drunk Driving) and a volunteer for Operation Christmas Child – it’s a matter of simply doing what you can.

“I think if you’re in a position where you can give back, you should. I think when you come from a point of privilege it’s really your responsibility to give back, especially to people who are less fortunate. It’s really rewarding.”

School principal Greg Thornton confirmed the school had some “great structural changes” happening in the school next year to enable younger students to get involved in the programme.