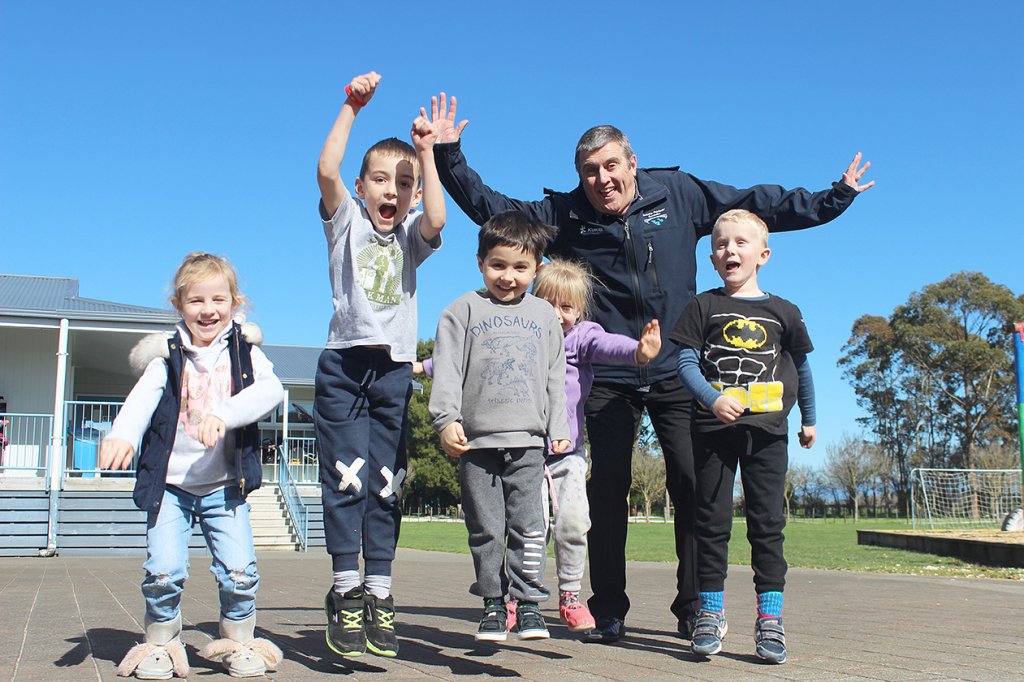 Goodwood Principal David Graham, celebrating the announcement with new-entrant students, said the new classroom would likely be placed somewhere near the school’s back field and playground (pictured) adding on to the classrooms surrounding the school courtyard.

An announcement by the Minister of Education that three Cambridge schools would each receive two new classrooms came as a welcome relief for principals.

“We’re all very excited,” said David Graham, principal of Goodwood School. “Our first meeting with the Ministry property team is happening this week … We hope to be in the new spaces sometime next year.”

Goodwood, Cambridge East and Leamington schools will each receive two new classrooms as part of the 79 new classrooms planned for the Waikato over the next four years, at a price tag of $42 million. It comes as part of the Government’s $1.2 billion National Education Growth Plan announced earlier this month which plans to introduce 100,000 new student places in high growth areas by 2030.

“It is certainly appreciated, we certainly need them, but at the moment it’s kind of like putting a band aid over a gushing wound,” said Cambridge East principal Hamish Fenemor, whose school roll has grown by 15 to 20 students each year over the past five years – with an additional 35 new students this year alone.

“With the numbers we’ve got now we’re three classrooms short,” said Fenemor. “Schools are good at being creative, so we’re just going to have to continue utilizing other spaces as classrooms.”

Waipā’s growing population has seen several Cambridge schools at or near capacity over the last four years, resorting to converting spaces like school libraries and foyers into learning spaces as they continued to wait for help from the Ministry.

Education Minister Chris Hipkins admitted during his announcement on Tuesday that the Ministry had taken too long to address the region’s growing student numbers.

“The Waikato is one of the fastest regions when it comes to growth, and we want to do a much better job in keeping up with that when it comes to schools,” Hipkins said. “We don’t want schools to end up overcrowded because at the moment we have been a bit too late when it comes to this.”

All three Cambridge schools are waiting to hear back from the Ministry with further details on exactly what sort of classrooms they’ll be getting, and when.

“We don’t know what order and what stage that we’re in, where we are on the priority list effectively,” said Fenemor. “The Minister was signalling to us that we were high on the SPG list, the school deficit, in terms of classroom space… So hopefully, fingers crossed, we’ll be in the first year of that (four year plan), and we’ll be into the planning stages around that shortly.

“If we’re in the first year of the implementation, we’ll see movement probably in the next 12 to 18 months in terms of classrooms being on site.”

Leamington principal Mike Malcolm confirmed each school would be meeting with the Ministry to come up with a plan and timeline.

“It means that we do not have to cram children into classes while we wait for the buildings to catch up,” he said.

“The sad part is we do lose some space in our school, but like the other classes we have built over recent years, if we are clever with how we do it we can use land that either is used seldomly by the children, or we can open up other spaces that have had little use to make them an interactive space for the children to use.”