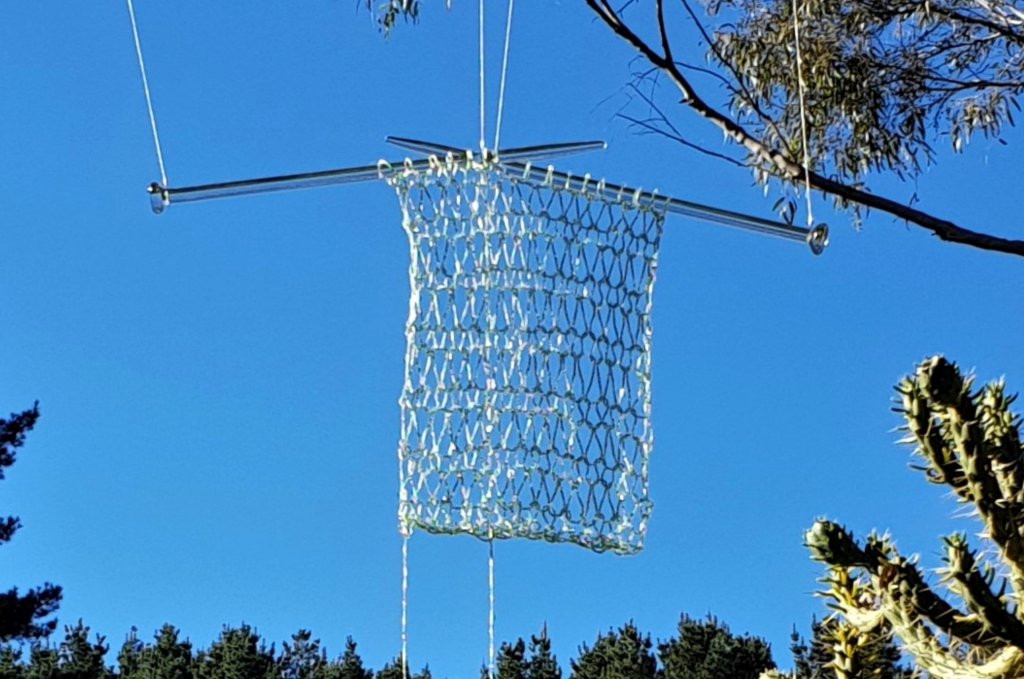 Stick to your Knitting – safely installed at the Waitakaruru Arboretum and Sculpture Park.

An award-winning glass sculpture depicting knitting has been successfully restored and re-hung in a tree at Waitakaruru Arboretum and Sculpture Park near Tauwhare.

Called Stick to your Knitting, the sculpture was made almost a decade ago by Cambridge-based glass artist Di Tocker for RE-FRACTION, a glass sculpture show hosted at Waitakaruru Sculpture Park in 2010. The work won the Waikato Sculpture Trust’s Swarbrick Dixon Award for excellence in glass sculpture.

During that show, the piece was purchased by Gilli Sutton, who installed it in her Taupo garden. Before she died several years ago, Gilli bequeathed her outdoor sculpture collection, including Stick to your Knitting, back to Waitakaruru Sculpture Park, but before it could be moved, the delicate glass work was seriously damaged in a storm. “The tree it was hanging in suffered storm damage, leaving the sculpture with broken needles and the rest of it a tangled mess,” Di explained. “Essentially, it had to be made again from scratch.  I had managed to save some of the beads, but the rest was a complete re-do.”

After many hours of painstaking work involving the rethreading of beads onto fishing line, then knitting it into shape using broomsticks, the job was finally completed and the sculpture installed at Whatakaruru Sculpture Park late last month.

“That in itself was quite a feat,” said Di.  “The guys who hung it did an amazing job.”

The idea for the original Stick to your Knitting burst into Di’s head one night after she had been asked to make something different for the 2010 RE-FRACTION show. “I literally work up suddenly one night with the sculpture fully-formed in my head.  I don’t normally make outdoor sculptures.”

The work was created from 12,000 glass beads and glass rods. Not being a knitter herself, Di enlisted the aid of her mum and expert knitter, Melanie Southworth, and together they worked out how they were going to develop the idea. “We worked on it together, creating a large-looped stitch based on stocking stitch.” 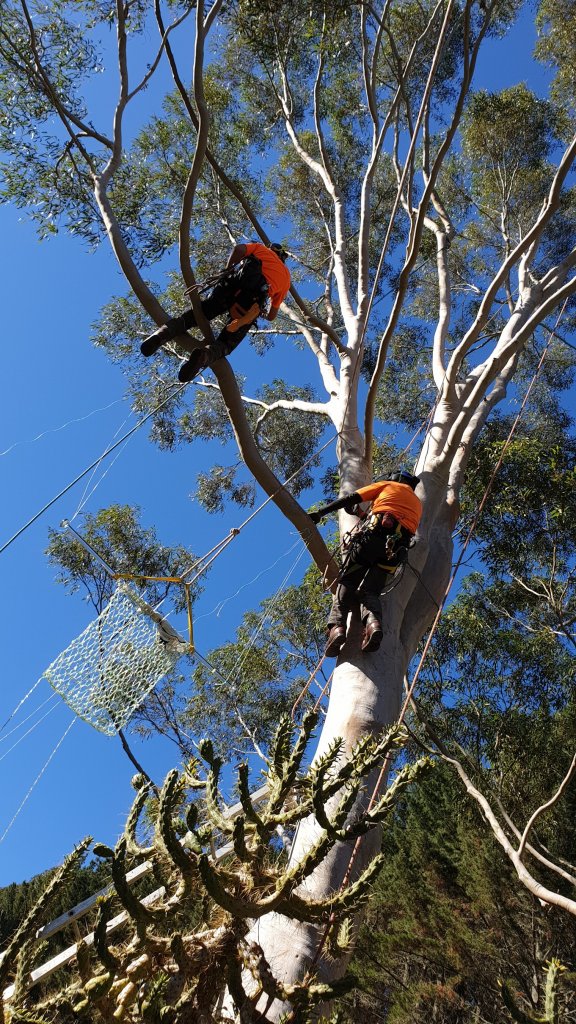 Skilled arborists did a great job installing the glass sculpture.

The respected judge of that initial show, Elizabeth McClure, said of the piece: “I love the spider web references, love the qualities of the glass … I love the bit of sway in the wind, love the glistening in the sun, exactly like morning dew on a web.”

Melanie was involved again for the sculpture’s restoration, helping ‘knit’ up the rows of beads using broomsticks and then sliding the finished work onto glass needles.

What is the Waitakaruru Arboretum and Sculpture Park?

The 17.5-hectare Waitakaruru Arboretum and Sculpture Park displays more than 100 sculptures and installations along its 2km nature trail, and attracts between 9000 and 10,000 visitors a year, many of them international.  Owners John and Dorothy Wakeling have been developing it since purchasing the site in 1991. The first sculpture park event was held in 2003.

Dorothy said more than 30 pieces from the late Gilli Sutton’s outdoor collection were now at the park – among them, Di Tocker’s work, Stick to your Knitting. Installing that had been a job for the experts, Dorothy said: “The arborists we brought in to do it did a wonderful job. It went very well.”

The park is at 207 Scotsman Valley Road, and visits are by appointment. Either phone 07-824 0733 or email sculpturepark1@gmail.com.