An initiative designed to teach Vanuatu women sewing skills and help them lead more independent lives has just won an international award for the Cambridge Altrusa Club for the second consecutive year.

The club’s Threads Across the Pacific project was awarded the Dr Nina Fay Calhoun International Relations Award and US$100 for Best International Project at the May 17-19 Altrusa District 15 conference in Te Awamutu.  It picked up the same award last year.

Cambridge also received the Governor’s Award this year in recognition of outstanding club achievement in all areas of operation.

As a result of its success, the Threads Across the Pacific project will feature at the Altrusa International Convention taking place in Reno, Nevada in July.

Altrusa is an international non-profit service organisation with a network of community-based clubs. New Zealand falls under Altrusa International District 15.

Cambridge Altrusa president Jenny Shaw said the club had enjoyed a good year across the boards.

“We’ve been active in a range of projects throughout the year, over and above the ongoing work we do for the Threads Across the Pacific project,” she said. “We do a lot with the residents at Selwyn St Andrews, for example, and also work with literacy.” 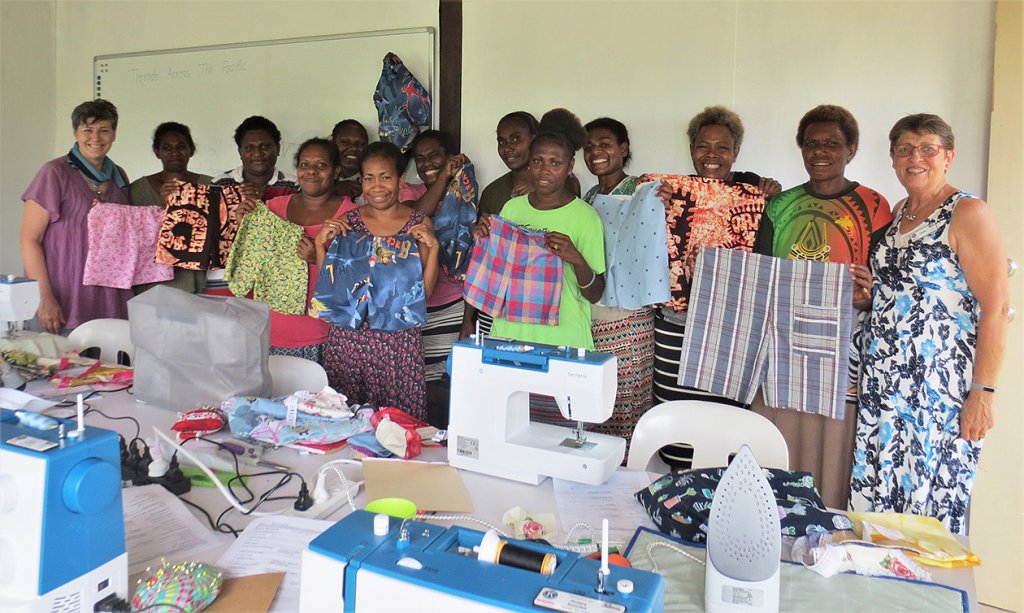 Cambridge Altrusa’s sewing teacher in the Pacific, Chris Davies (right), and New Zealand volunteer Leanne Kenah (left) at one of the sewing workshops in Vanuatu. The women are holding up shorts they have made for their families.

Threads Across the Pacific grew out of something started by Tauranga Altrusa member Caroline Mason several years ago. She and several other Kiwi women took fabric to Vanuatu with a view to teaching local women sewing and thereby enabling them to start their own businesses.  The left-over fabric ended up in the hands of De-ane Busby, then president of Cambridge Altrusa. She described the project as a ‘hand-up, not hand-out’ initiative that sends sewing machines, fabrics and threads to Vanuatu schools where Altrusa volunteers teach sewing to the young women.

Local members have supported the project for the last couple of years.