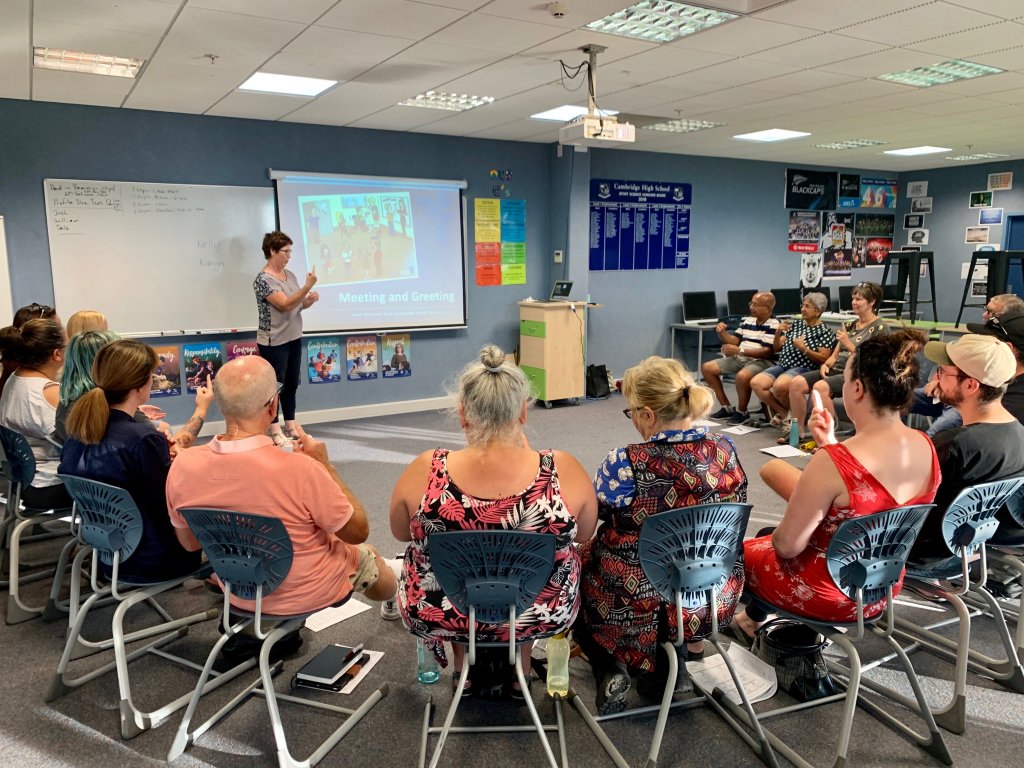 Kelly Quirke teaching one of her sign language classes in Cambridge.

One of New Zealand’s three official languages were celebrated this week with New Zealand Sign Language Week running May 6-12. Kicking off on Monday, the week-long initiative aims to celebrate the language as well as raise awareness to the Deaf community and Deaf culture.

New Zealand Sign Language (NZSL) is unique to New Zealand, used by over 24,000 Kiwis daily. In fact, most countries have their own version of sign language. Cambridge resident and NZSL tutor Kelly Quirke is working to encourage more people to learn NZSL, teaching weekly night classes at Cambridge High School during term time.

The mother of two has been using New Zealand Sign Language her entire life, she was born Deaf, and has spent the last 30 years teaching on and off. Kelly’s work at Cambridge High School over the last three years has generated an increased interest from the public, with classes ranging from beginner to advanced.

“I want to advocate for unlimited communication,” she said. “I want to encourage people to think beyond saying hello and asking how someone is. It’s a good start, but the conversation needs to keep moving.”

A question Kelly said she is often asked is, how long does it take to learn the language?

“You can start communicating straight away, although through practice you become more fluent and the conversation becomes more comfortable,” she said.

Kelly recently decided to set up her own business called “Usign” – deriving from the commonly used sign for the word “you” which is used frequently for referencing in NZSL. The vision, Kelly said, is to bring Deaf people and hearing people together as one community.

“I really want to encourage all people to communicate without limitations,” she explained. “Through the use of facial expression and body language we can find ways to communicate successfully.”

Usign aims to expand the population of people who have a basic understanding of NZSL, offering lessons to individuals, educational organisations and libraries.

NZSL promotes confidence and good brain activity, said Kelly, noting that NZSL is not just for the Deaf community, but all ages and walks of life. If more people can learn it, she said, it would be a positive move for the community.

Kelly and her sister are both Deaf, but didn’t give it much thought growing up. They had a normal life and developed NZSL as their first language, before English. During their school days at a school for the Deaf, sign language was forbidden, essentially forcing it ‘underground’. It wasn’t until the late 1980s that NZSL was introduced to Deaf schools throughout New Zealand.

Despite the medical view by some that a Deaf person has something ‘wrong’ with them, Kelly said she would rather focus on solutions – like communication, sign language and equality for the Deaf.

“There needs to be better understanding of Deaf people, rather than feeling sorry for Deaf,” she said. “I am not limited by my Deafness. It’s not about what I can’t do, it’s about what I can do. There is no shame in being Deaf. I’m proud of it.

“It feels great when I see people in the community meeting and signing and communicating with each other.”

Kelly welcomes locals to come along to a class and give it a try. Classes started at Cambridge High School on Monday, May 6. To find out more, contact Kelly on kelly@usign.co.nz or text 0275377779.