Skimming across the surface of the lake at up to 70km/h is one thing, catapulting off a ramp and flying through the air is quite another.

That’s what 18 barefoot skiers from around the region opted to do at Piarere over last weekend, competing in the 2019 Waikato Regional Barefoot Water Ski Championships.

“The rush of being out there on the water is pretty cool,” said William Leigh, third place winner of the open men’s division.

With the championships made up of three rounds – trick, slalom and jump – things started quite well for the 2018 St Peter’s graduate, who moved from Piarere to Queenstown to study Adventure Tourism this year. He won the trick round comfortably, and finished fifth in the slalom and third-equal in the jump.

“It was a bit funny,” William explained, “since normally we’d get two rounds of three jumps.” 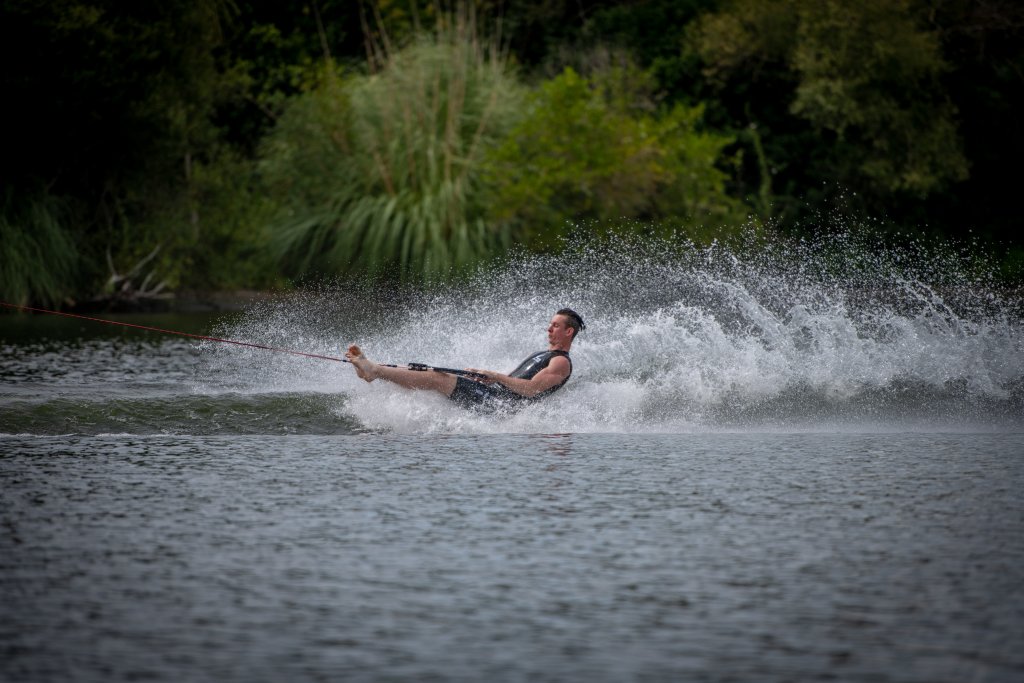 William Leigh on his way to winning the trick round of the open men’s division. Photo – Conrad Blind / Picture Show Ltd.

As the weather turned for the worse on Saturday afternoon, bringing a strong wind down the lake, competitors waited over an hour and a half for conditions to improve. With time limited, the competition resumed with one round for each skier instead of two, each consisting of two attempts, meaning skiers had just two chances to give it their best instead of six.

In the open men’s jump, only two competitors landed both their jumps. Will placed third behind them, ahead of all the others with a failed attempt.

“I would have liked to land the jump, that would have got me first overall, but that’s just the way the sport goes!” said William, adding that he was “pretty pleased” with the overall result, considering he hasn’t been skiing during his time down south. “I was pretty stoked to come away with the win in the trick.”

Wellington’s Bevan Kelly took out the open men’s division, followed by Tauranga’s Tom Mathis second. But it was women’s division winner, Wellington’s Georgia Groen, that dominated all competitors, setting the longest jump on the day which not only beat Bevan Kelly’s jump, but equalled the New Zealand women’s jump record. Adding to the impressive feat was the fact that Georgia did an inverted jump, a very rare style where the skier flies throughout the jump with their feet behind them, rather than switching into a long-jump style position like most skiers. She’s one of only four skiers in the world known to do this. With a 22m jump, she beat Bevan Kelly’s jump of 21.3 and Tom Mathis’s next-best jump of the competition at 18.5m.

“Georgia did extremely well,” said Piarere local Joanne Leigh, one of the main organisers of the event.

“We had to be patient this weekend, the wind was coming straight down the lake which held up competition on Saturday afternoon and Sunday morning. But when it died down we got some great skiing in.

“We have some great young local skiers coming up through the ranks in Jack Mathis and James McGuire, two St Peter’s students from Te Awamutu.”

“They produced lots of personal bests and loved skiing with the more experienced skiers, who they pick up some great tips from.” Many of the skiers will reconvene at Rotorua’s Lake Otaro at the end of next month along with the country’s best barefooters for the 2019 Barefoot Water Ski National Championships.