Richard Ellis (right) smiles for the camera with Shane Kerr after winning the prize for heaviest snapper.

Organisers of the Leamington Fishing Contest described the Friday-to-Sunday competition as a “great weekend of fishing” followed by an “awesome day” on Sunday when the final weigh in was held.

The haul of 166 fish, caught at coasts around the country, were auctioned off at the Leamington Rugby clubrooms on Sunday, totaling $3,541 for the Prostate Cancer Foundation of New Zealand. It narrowly beat last year’s efforts by about $50.

Weigh-in ticket sales went above and beyond last year’s 182 total with a record 226 sold – proceeds of which went towards the club. 166 fish were auctioned off at the Leamington Fishing Contest weigh-in in Sunday.

“Cambridge has again been very generous with their donations of prizes and the Leamington Rugby Club are very grateful for the community spirit which allows them to run this contest,” said Carolyn Wallis, one of the organizers of the event which was spearheaded once again this year by founder Shane Kerr along with the help of organizer and sponsor Roly Bolton.

“And a huge thank you to Shane Kerr for the effort that he puts into organizing the annual contest, this being his 10th year of running the contest.” Ngairina Colvin and Lance Colvin weigh in the goods.

Abby also won the award for the biggest gurnard weighed in by a child under 12.

The award for the biggest snapper weighed in by a woman went to Glennis Tyson with a fish weighing 6.49kg. Alan Dahlberg (right) had reason to smile after winning two spot prizes valued at $750 in total, pictured with one of the prize sponsors Keith Keoghan.

A huge range of spot prizes were handed out at the weigh in too, such as a $2,500 tool set, fishing rod and chilly bag from Bayonne Construction, which was won by Melanie McFarlane.

In total, 175 sponsors pitched in towards the event, donating prizes for the various fishing categories. “38 of these sponsors were major sponsors donating $200 or more,” said Carolyn. 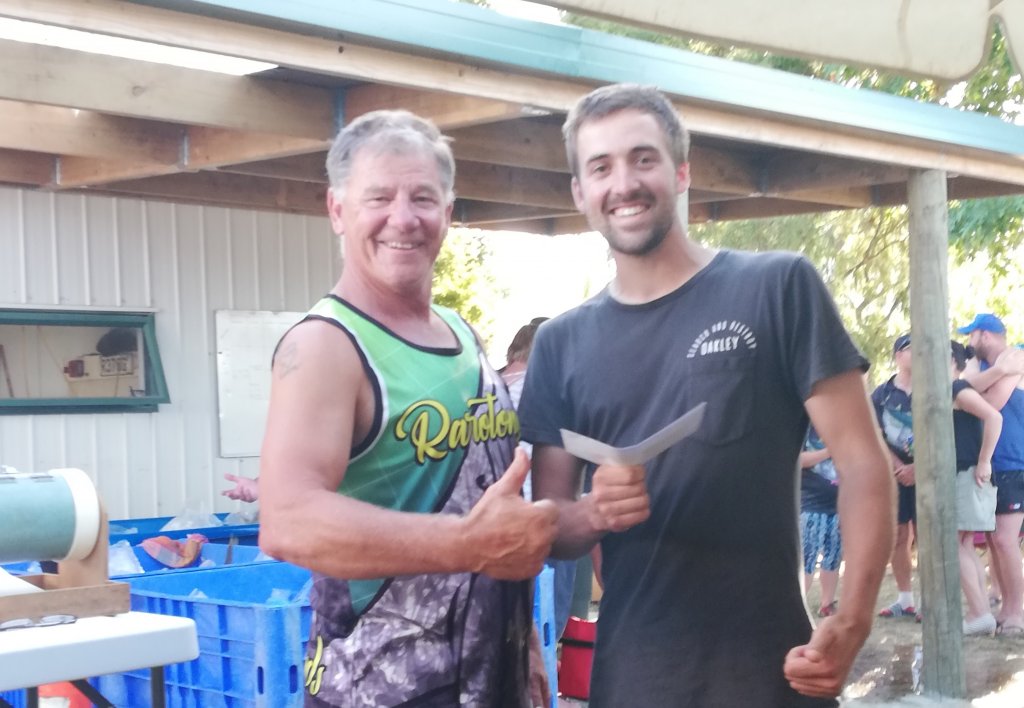 Having organized the event for ten years now, founder Shane Kerr will hand over the reigns next year to Roly’s son Karl Bolton. “As a community we wish Karl the best and hope that everyone continues to get behind Karl and the Leamington Rugby Club again,” said Carolyn.