After a 30-day public ban on the Sanctuary Mountain wetland was lifted recently, in place to protect its newest arrivals, we ventured inside to capture photos of the rare new takahe chicks hatched over Labour weekend.

Cameras in hand, unsure of what we might see, a Cambridge News team ventured into Sanctuary Mountain’s wetland enclosure last week in hopes of spotting their new takahe chicks.

Born in late October, the two chicks have been in a protective lockdown for the past few weeks, meaning no guided tours or public access of any kind, with just one Sanctuary Mountain volunteer venturing into the enclosure to provide supplementary food three times a week. It was a safeguard to ensure their dad Ngutu Whero, mum Nancy and older sister Jan could care for the chicks in peace, without the chance of abandoning their nest at the thought of danger. Now with the chicks a little older, even venturing out from the nest themselves, we jumped at the chance to finally get inside the enclosure and see them for ourselves.

Accompanied by lead guide Tali Jellyman, we ventured into the wetland enclosure atop Maungatautari Mountain on Friday last week, with the first sunshine in several days increasing our chances of seeing them out and about.

But after about half an hour of quietly trekking through their grassy enclosure we began to doubt we would see them, until we heard the distinctive “thud” sound their parents make when potential threats approach. Senses heightened, trying to figure our where the sound was coming from, we peered up through the trees onto a grassy hill above us and spotted the distinct red beak of one of the takahe adults, peering at us through the long grass.

We quickly pulled out our cameras and snapped pictures from where we stood of the adult bird, unable to venture any closer and disturb them. Soon the thudding sounds stopped – they could sense we weren’t a threat – and finally, with much internal excitement on our part, the cute and curious chicks popped out through the grass and were able to capture them on film.

Lead guide Tali noted how their feathers had changed from black to now a slight greyish colour – on their way to the iconic blue colour of their parents – and they had grown in size too. She said it was quite a rarity for the endangered birds to produce two surviving young.  “It’s the most ideal scenario to have two chicks survive, this is the first time I’ve seen it,” she said, explaining that the 30-day lock down was part of the protocol they follow outlined by the Takahe Recovery Group. “It’s all about giving them the space to do what they need to do,” she said. 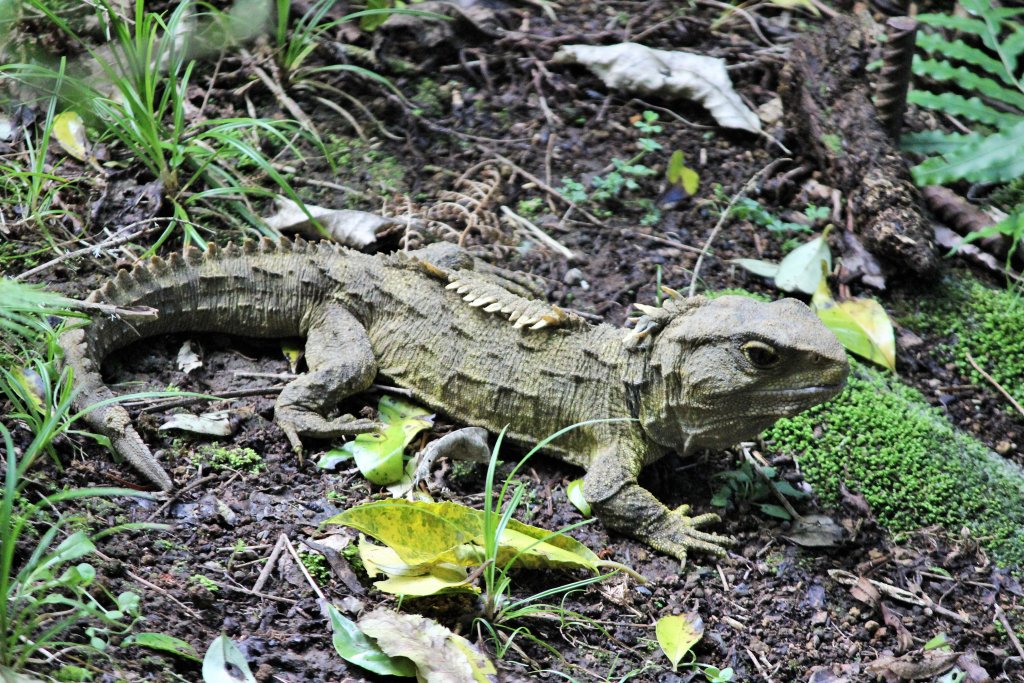 During our tour of the Tuatarium we spotted three Tuatara over 30 years old, sitting right on the side of the track.

Unlike the southern enclosure on Sanctuary Mountain Maungatautari, which is open to the public, visiting the three-hectare wetland enclosure is only available through bookings with a tour guide, which will usually take place at 1pm. During the wetland tour visitors can check out the Tuatarium area, where 20 tuataras were released in 2012 from Stephens Island in the Malborough Sounds. Aged around 30 to 40 years old, they’re about the size of a person’s forearm, and quite visible to view right on the side of the walk way. This year has seen record sighting of juveniles too, a promising prospect for the ecological island – conserving native species right in our own backyard.