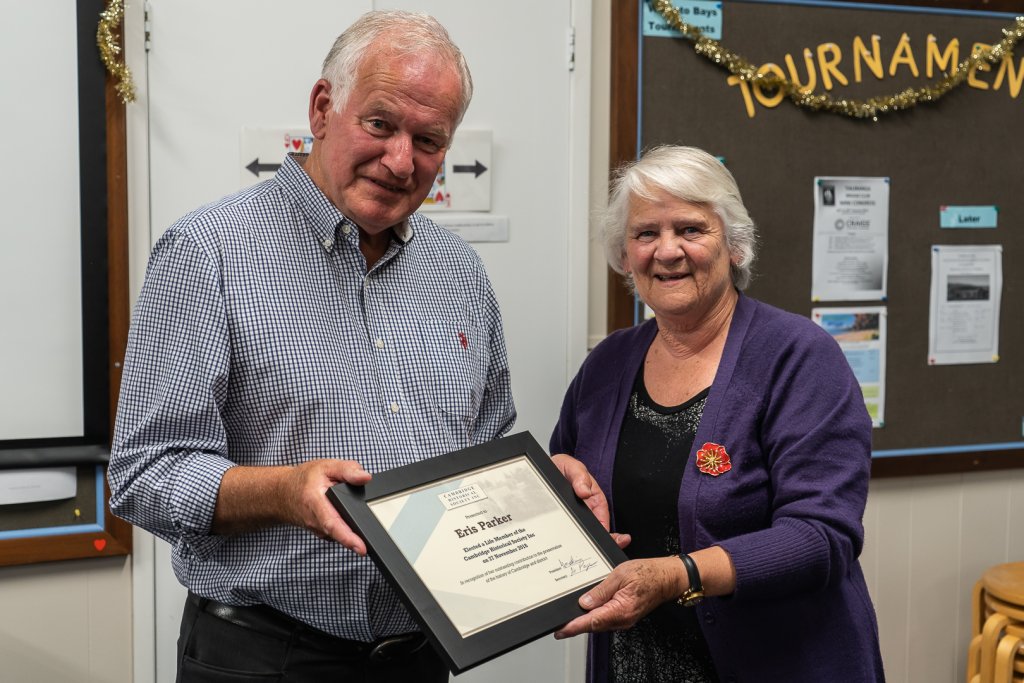 Long-time local historian and prolific writer Eris Parker has been made a life member of the Cambridge Historical Society (CHS) – and not a moment too soon, most locals would agree.

The honour, awarded at the Society’s late November AGM, makes Eris the 10th recipient of life membership in the Society’s 62-year history. The relatively rare award has been a long time coming for the smiling grandmother described warmly by Society chairman Grant Middlemiss as a “self-confessed rottweiler”.

Few people in Cambridge wouldn’t know of Eris.  She spent four years volunteering at the Cambridge Museum in the 1980s before becoming its curator for a further 21 years. Throughout those decades and beyond, Eris established herself as the ‘go-to person’ for matters historical in the region, applying a dogged research style into bringing to light stories about the people with ties to Cambridge – military, commercial or otherwise.

Yet even with all her intuitive ‘nose’ for the hidden, it seems Eris didn’t know the award was coming.

“I did get the AGM agenda and noted their intention to award life membership to someone. It didn’t say who, and I must admit that I did wonder at first who it could be going to,” she laughed.

There are suggestions that earlier awards from elsewhere have been on offer, but Eris hasn’t wanted a bar of it.  This one is different … it smacks of recognition by like-minded people, and she is both delighted and honoured.

“I am quite pleased to be up there with all those other fellows,” she said, adding with trademark self-deprecating humour that she read the small print carefully.  “I wanted to make sure it was life membership, not a life sentence!”

Eris’s segway into matters historical happened almost by chance, with a slight nudge from her mum.  Born and bred in Cambridge to parents that hailed from Whangarei and Wellington, Eris was keen to research her own genealogy and thought she’d drop into the Cambridge Museum to see how small-town museums did such things. The idea was to get a feel for it, then snoop further afield.

The upshot was that she found herself ‘seduced and fascinated’ by the amount of material she needed to sift through, so much so that she offered to help with the indexing programme, and her years of volunteering at the museum began. In 1992, she went in full-time as the museum’s curator.

“We got our computer a year or so later … it was a good time to expand the collection beyond the Cambridge pioneers,” she said. Later, she also extended the museum’s opening hours.

In her down time, Eris researched and wrote somewhere between 30 and 40 books, brochures and other documents. Her first book focused on women’s suffrage, something she also made a video of later on. “I realised there were a lot of stories we were leaving out because women were largely ignored in the historical record.”

She also made 36 photo books with a focus on Cambridge people, and has done over 80 talks over the past 25 years to various local and regional groups and organisations. When she retired from the museum in 2013, then Waipa District Councillor Barbara Taranaki described Eris as “one of Cambridge’s real treasures”.

When presenting Eris with the Cambridge Historical Society life membership, Grant spoke of her having joined the Society almost 30 years earlier, later serving as a committee member, secretary and president.

“Eris can best be described as a history nut,” he said. “She thrives on research, her indexing and commitment to tracking down details on Cambridge people and topics is ‘legendary’. In fact, her output is so great that some believe she doesn’t sleep!”