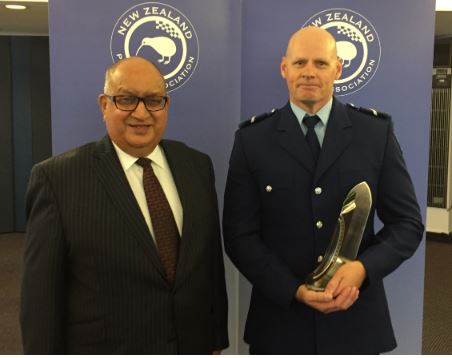 An off-duty police officer who scrambled into the water to rescue occupants of the ute that plunged off the low-level bridge in 2017 has received this year’s Police Association’s Bravery Award for his actions. Senior constable Scott Quate, nominated by his peers, was presented with his award by former Govenor General, Sir Anand Satyanand last week.

The senior constable was off duty, driving with his partner and baby to Cambridge on August 19, when a ute ahead of them left the road at the Fergusson Bridge (low level), plunging 10 metres into the Waikato River.

Without hesitation, Scott scrambled down a steep, 10-metre slope, then fully clothed, waded into the river, fighting the current and overhanging trees to help rescue the pair.

The Police investigation team noted that the rescued man, Derek Keesing, would almost certainly have died in the freezing and turbulent waters if not for Scott’s actions. Keesing’s girlfriend, Susan Donna Ramsay, died in hospital two days after the crash. Keesing was subsequently convicted of careless driving causing death for the incident.

Based in Napier, Scott works as a road policing officer. Eastern District Commander Superintendent Tania Kura said he had acted with great courage and presence of mind in very difficult circumstances. Senior constable Scott Quate raced down a steep 10-metre slope and waded into the river to help rescue Derek Keesing and Susan Donna Ramsay after their ute went off the road and into the river in August 2017.