Christmas Parade organisers Miff Macdiarmid (left) and Rachael Colgan are looking forward to this year’s parade, with Rachael in her twelfth year and Miff in her first.

It may seem a little early to be talking about Christmas, but organisers of the Cambridge Christmas Parade are encouraging people to get their float entries in as soon as possible before their 50-float limit is reached.

“It does fill up pretty fast,” said Miff Macdiarmid, CEO of Destination Cambridge and one of the judges of this year’s parade, explaining that float organisers should “be in quick so they don’t miss out”. Last year’s event saw a total of 750 people involved in the floats that cruised the main streets of Cambridge. That day there were two and a half thousand people in town, and organisers expect a spectacular turn out once again this year.

Taking over as CEO of Destination Cambridge from Roger Gordon in July, it will be Miff’s first time organising the Christmas Parade this year along with Cambridge i-SITE staff and parade organiser extraordinaire Vicky Ewing.

“Roger has had a really good run of beautiful weather, so hopefully I don’t jinx it!” Miff laughed. 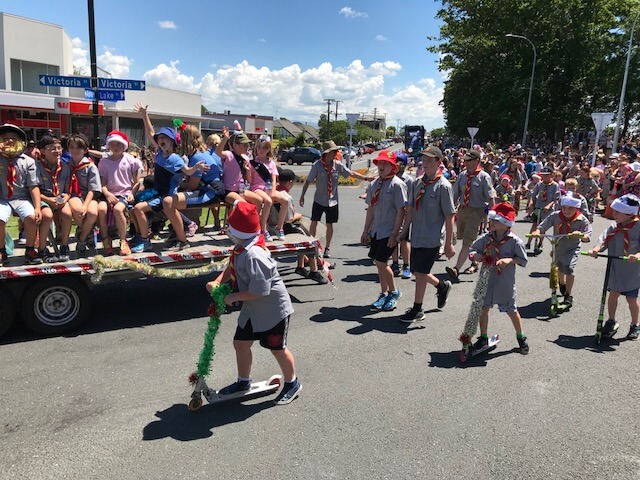 The 2017 Christmas Parade saw two and a half thousand people in town, including 750 people involved with the floats.

This year’s parade, on Sunday, December 2, will have the theme “Colours of Christmas” meaning Christmas colours should feature on the floats – any colour from red, white, green, gold or silver. “They can interpret that however they want really,” Miff explained, adding that “preparation is the key, so start early. A bit of forward planning can make it a lot less stressful.”

Entries close on November 23, but floats are accepted on a first-come-first served basis, and a with few entries in already, people need to get the ball rolling now. With New World on board again this year as the parade’s major sponsor, the overall float winner will receive a $500 New World voucher, and each category winner, sponsored by Kaz Design and GW Scott & Associates, will receive a $250 New World voucher.

Entries are now open and close on the 23rd of November 2018.  Entry forms are available from the Cambridge i-SITE or by email – info@cambridge.co.nz.