Spotlight on the community patrol

Claire Castle went out on the beat with the Cambridge Community Patrol recently, finding out more about the volunteers who are working hard to keep the town safe. 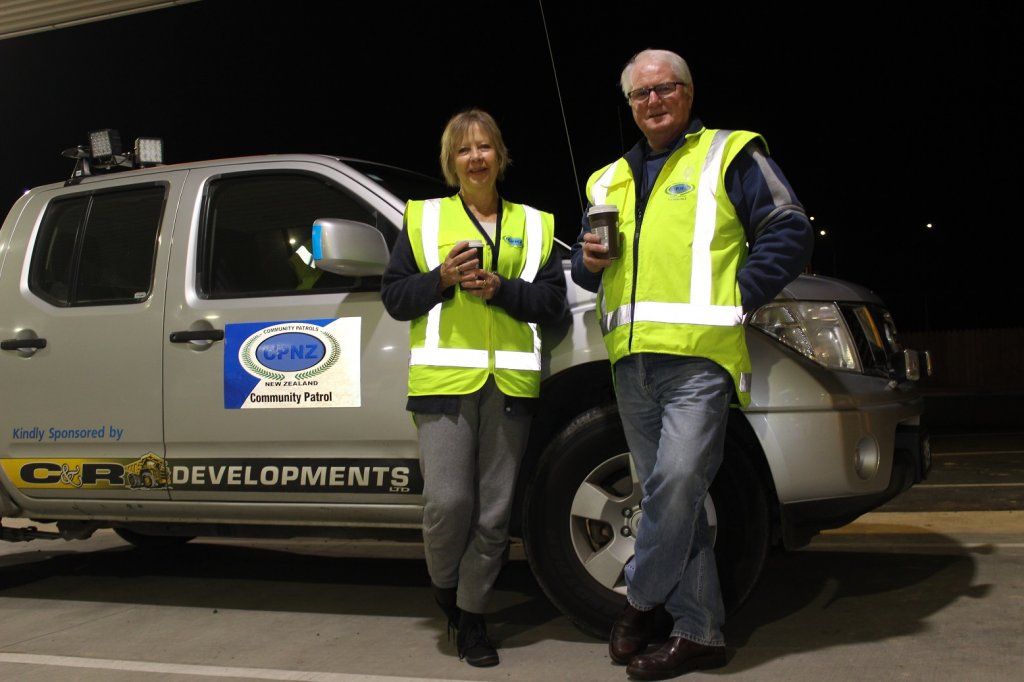 Allison Vince and Neil Bridgland enjoying a coffee at the Hautapu Z station, a welcome warmer on a cold night of community patrol.

I was full of questions before I went out with the Cambridge Community Patrol – Who are they? What do they do? Would I get a taser? – so many questions I couldn’t wait to answer.

I finally got my chance one freezing Thursday night recently, turning up at patrol HQ to drive around the streets with a couple of volunteers, looking for anything untoward happening in town.

The first thing that surprised me about the community patrol was the level of professionalism involved. There is a sign-written ute with spotlights, high-vis vests and a police radio, and each volunteer undergoes comprehensive training. There’s also a crime report, giving the patrol the heads up on what to look out for (on the night I went out, it was a stolen ute, sometimes it might be a missing person).  After we radioed in to police communications to let them know we were hitting the road, volunteers Neil Bridgland and Allison Vince and I began our circuit around the “nooks and crannies” of Cambridge. That was the other thing that surprised me – how many little back alleyways there are in town. Neil and Allison agreed. They’ve both lived here for many years but said the patrol had taken them to places they didn’t know existed. “We pretty much know all the hidey holes now,” Neil laughed.

With one ear on the police radio, we carried on driving around a mostly deserted Cambridge. Being a Thursday night, it was pretty quiet, but that’s usually the case in Cambridge, Neil said.

And the response from police to the patrol, acting as extra eyes and ears on the streets, has been positive, Neil added.

The town was locked up tight on the night I went along, which was a far cry from when the patrol first started last year, Neil said. Schools were particularly lax with security back then, however a couple of middle-of-the-night phone calls to the principals asking them to come out and secure buildings have sorted this issue out. Same with businesses – there’s a list of the town’s businesses and contact details of the owners in the ute, so if there is an open window or door somewhere the patrol can let the owner know. Those kind of phone calls are no fun to receive, so things have tightened right up, Neil explained.

With Neil driving, Allison had an eagle-eye out for anything untoward, and I was surprised at how sharp they both were. This was partly helped by the free hot drinks provided by the Z Station at Hautapu; a welcome pit-stop from the night’s driving.

We also swung past known trouble spots in town (these places were news to me), just to make sure there’s nothing going on – there wasn’t. On the night I went out, we also drove around some retirement villages after reports of late night lurkers making a nuisance of themselves by knocking on windows, with the high-powered spotlight making sure there was nobody hanging around – there wasn’t.

Over the course of the evening, we notched up 85km around Cambridge and the surrounding areas, and I came away impressed with the work the community patrol does. While it might seem strange that they can’t actually intervene if they see a crime in progress, the deterrent factor of the patrol alone makes it a valuable addition to the town. Plus the fact they are extra eyes and ears for police, working closely with them to keep the town safe.

They’ve also been involved in tracking down a few missing people, such as residents who may have wandered away from rest homes, which has prevented the need for a full-on search and rescue exercise, he added.

And Cambridge has got behind them, too, with a level of support that Neil said is not necessarily forthcoming in other towns.

It’s entirely run by volunteers with the support of local businesses, and they are doing a good thing I reckon.

The Cambridge Community Patrol is one of nearly 200 throughout New Zealand, with 36 trained volunteers on the books. But they are always looking for more, with the expectation that candidates can do one or two shifts a month.