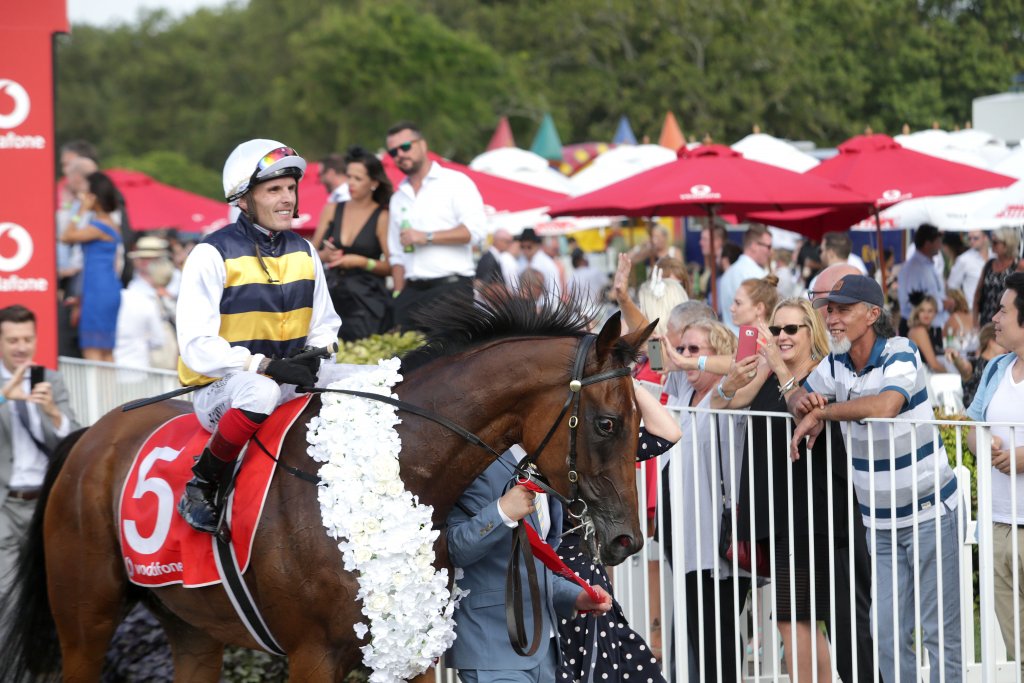 Jockey Jason Waddell started the new racing season at Tauranga on Wednesday with even more incentive to ride winners.

The 32-year-old Group One-winning jockey has had a lengthy battle with depression and he’s not about to hide it. In fact, he has decided to use his own struggle against the illness to highlight the growing issue in an attempt to help others.

Depression is an illness gaining increased mainstream publicity and Waddell wants to bring that awareness out more in the racing scene.

“From the beginning of the season I am donating five per cent of all my earnings to the Mental Health Foundation of New Zealand,” he said.

“I’ve had a lot of help from psychiatrists in the last two years and it’s my way of giving something back.

“I’m getting a bit older and in a position financially to help others not so fortunate. If I can also help even just one person suffering from depression by them coming to me then I feel I’ve done a good job.

“I’ve just had my best season with a couple of Group One wins, including the Derby, and I want to show that you can still be at the top of your game even if you do suffer from depression.

“It’s nothing to shy away from. There is help out there and I’m fortunate I’ve had it, so now I feel it’s my turn to help if I can.”

Waddell has the Mental Health Foundation of New Zealand logo stitched to his silks.

“It’ll be there every raceday I ride to help make people more aware of depression and the help that is out there,” he said.

Depression is in all walks of life and racing has been hit with tragic results at times.

To say the Cambridge jockey’s career has been a rollercoaster ride is an understatement. He’s has too many suspensions and disqualifications and spent time at anger management courses, all through what he describes as “stupid mistakes”. Underlying a lot of it was his depression.

“My first bout of depression was when I was 19 and my parents split up,” he said. “Initially it was thought I was suffering bipolar disorder, but then it was changed to depression.”

A variety of medications led to weight fluctuation and mood swings.

“I was doing things wrong and I knew it, but I still did them. I don’t know why,” he said.

“I’ve been off that medication for five years now. The medication doesn’t sit well with fluctuating my weight and keeping the weight down is important for a jockey.”

Certain events have set off his depression and the death of his mother, Sandy, last year from bowel cancer was naturally one of the saddest days in his life.

“She was my rock,” Waddell said. “She was an amputee and had been a fighter all her life. She lasted until Melbourne Cup day and it was too much for her. It got her in the end.

“The day after she died I had two rides at Waipa and won them both. I didn’t give myself a chance to grieve. I was focused on not letting it (depression) happen.

“Fortunately I had so many good rides to focus on and a good support group that helped me get through it.

“My wife Anna has been amazing. She has lived with my highs and lows and been there to pick me up. And my manager Darryl Anderson has stood by me throughout.”

Waddell says he managed to fight off the depression knowing he had the chance to win the Gr.1 ATC Derby (2400m) with Vin De Dance.

“I managed to hold it together and it was tough, but I knew I had a good chance over there,” he said. “I didn’t want to let anyone down. I’d been there and done that in the past.”

“I had a necklace made with some of Mum’s jewellery melted down and inside the capsule are some of her ashes,” he said. “I wore it for the first time in the Derby. Mum was with me.

“I’ll never forget that day. It was bitter sweet to beat Michael (McNab). If I hadn’t won it, I’d hoped he would. He’d been through the same as me, losing his mother to cancer. There’s a bond between us. We were friends before, but now we’re great friends.”

Waddell got to Sydney for Vin De Dance’s Derby tilt, but he admits it was tough.

However, straight after finishing fourth on Vin De Dance in the ATC Derby, it all got too much for Waddell and the depression set in.

“The day after the Derby I flew home and virtually didn’t leave the house for a month,” he said.

“Rather than let everyone down I decided to take four months off to try and get myself right.

“I started seeing my psychiatrist again and fortunately we had a trip planned to Sweden to see Anna’s family with four days in Spain on our own, just me and Anna. That all helped.

“I was 67 kilos when I left home, but I started training over there and within a month I’d lost six kilos.”

The holiday, along with the training, has helped Waddell resume race riding earlier than he imagined.

“I didn’t expect to be back until two weeks into the new season, but I was back at Te Rapa (July 21) and I’m feeling great,” he said. “My weight is coming down, but I don’t plan to ride under 56.5kgs.”

Waddell has ridden 590 winners in New Zealand, enjoyed success abroad, and last season he raked up 35 wins from 183 rides in New Zealand for a personal prizemoney record of $1,602,115.

“I’ve had an amazing season,” he said. “I had seven stakes winners, including two Group Ones. It was my best season, but because of the depression I didn’t ride through it all.

“The holiday is just what I needed. It’s made me hungry for winners and I’m so looking forward to riding horses like Julius, Demonetization and Vin De Dance again.

“I’m an all-in or all-out guy and I’m telling my story to try and help other people in my situation.

“I’ve got an amazing wife, two lovely kids (Charlie and Connor) and so much to look forward to. I want to prove you can handle depression and still make the most of life.”