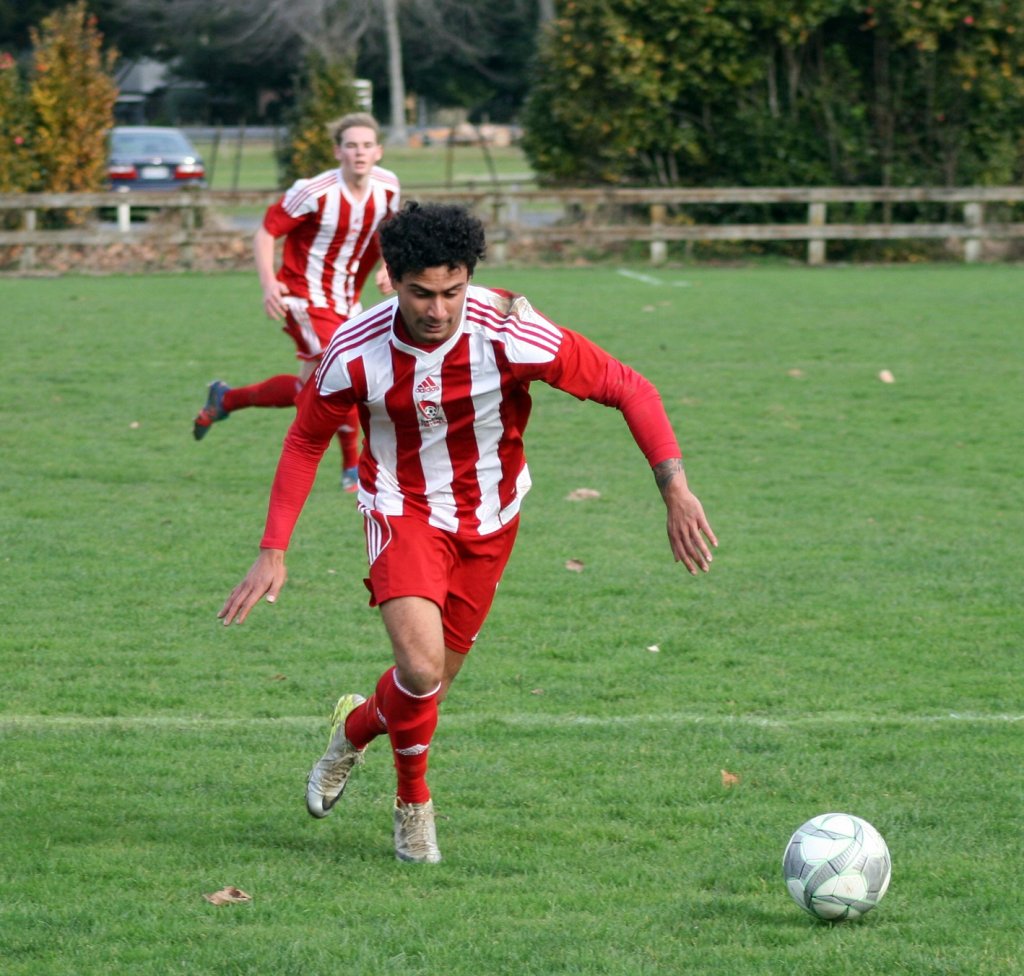 Cambridge go into their last home game of football’s Northern League season in need of a win to get clear of the risk of relegation. The Reds play Franklin United at John Kerkhof Park on Saturday (3pm kick off) and are urging local supporters to cheer them towards a much-needed victory.

After a 4-2 loss at Auckland’s Bucklands Beach over the weekend, Cambridge slipped to second bottom place on the Lotto NRFL second division table. The two bottom teams in the competition at season’s end are at risk of being relegated.

So tight is the competition that a win this weekend could lift Cambridge three or four league places. The Reds still have three away fixtures to come (against Northland, Te Atatu and divisional leaders Takapuna).

A poor start cost Cambridge on Saturday when Bucklands Beach raced to a 3-0 lead within half an hour with goals from Daniel Culpan, Josh Kingston-Smith and Ben Culpan. Reds defender Daniel Clarkin reduced the deficit to 3-1 when he converted a Callum MacLeod corner in the 33rd minute. However Kingston-Smith extended the home team’s lead to 4-1 before the interval.

In the second half, Cambridge had the better of the play and in the 65th minute Daniel Clarkin scored his fifth goal of the season, getting the last touch to a MacLeod free kick.

Meanwhile, in the curtainraiser, Cambridge reserves retained their lead in the Lotto NRFL second division reserves league after a clean sheet earned the Reds a valuable point against third-placed Bucklands Beach.

The match at Auckland’s Lloyd Elsmore Park brought together the two teams with the best defensive records in the competition so it was hardly a surprise when they battled out a scoreless draw. The draw effectively ended Bucklands Beach’s hopes of catching Cambridge, leaving second-placed Takapuna AFC as the only serious contenders for the title. Takapuna drew 2-2 with Metro FC to remain three points behind the Reds, and with the two competition leaders due to meet in the final game of the season on September 1.

In other games, Cambridge lost 5-1 to Waikato Unicol in the Loaded WaiBOP Championship. Cambridge took the lead at Jansen Park in the 10th minute through Hector Giraldo but Unicol then found their feet and went to a 2-1 lead at half-time before adding three goals in the second spell. Unicol scorers were Henry Leech (2), Riley Rigdon, Taylor Bell-Booth and an own goal.

The Cambridge D1 side kept their lead of the Waikato D division with a 4-1 at West Hamilton United’s Bremworth Park. Cambridge scorers were Dave O’Donnell (2), Dennis Hommel and Scott Jenkins who put his away his sixth penalty of the season.

The D2 team went in search of their fourth win in succession with a trip to Te Aroha Cobras. Missing a few regular players, the D2s suffered a 2-1 loss. Their goalscorer was Tom Horrix. Next weekend, the D1s host second-placed Te Aroha Cobras in a game that will be crucial to end-of-season honours.

Cambridge women’s team shared the points after a thrilling 3-3 draw with Northern United in the Waikato Women’s A-League. The draw extended the team’s unbeaten run to five games and keeps them in contention for a late run at the division title, especially with a match next week against leaders West Hamilton United.

Cambridge’s goals were scored by Astrid Howarth – her 20th of the season – Abby Cook (from the penalty spot) and Amy Ireland who netted the goal of the day with a superbly struck free kick. Amy Ireland was also named the Hill Homes Player of the Day and coach Andrew Taylor also singled out Carey Ireland and Chrissy Goodin for their outstanding performances.

The Cambridge U-12 boys beat Melville United 3-2 at Hamilton’s Gower Park in the WaiBOP Federation Junior League. The teams raced to a 2-2 scoreline by half-time with Cambridge goals from Theo Susillia (11th minute) and Blake Taylor (22nd minute). Taylor grabbed the winner in the second half.