More than twenty CHS students are working on projects for the 2018 EVolocity Regional Final.

Materials technology students at Cambridge High School are gearing up for what some consider to be the pinnacle event of their material technology learning, putting their skills to the test in making and racing an electric vehicle in the 2018 EVolocity Regional Final.

The event on September 29, held at the go-kart track on Airport Rd, will see over 100 students from 16 schools around the Waikato compete across 10 different phases, being tested for a number of variables including speed, manoeuvrability, energy efficiency and safety, and of course the best “look”.

Earlier this year student teams taking part in the competition were each given an electric motor, left to themselves – with teacher supervision and support – to turn it into a fully functioning electric vehicle. 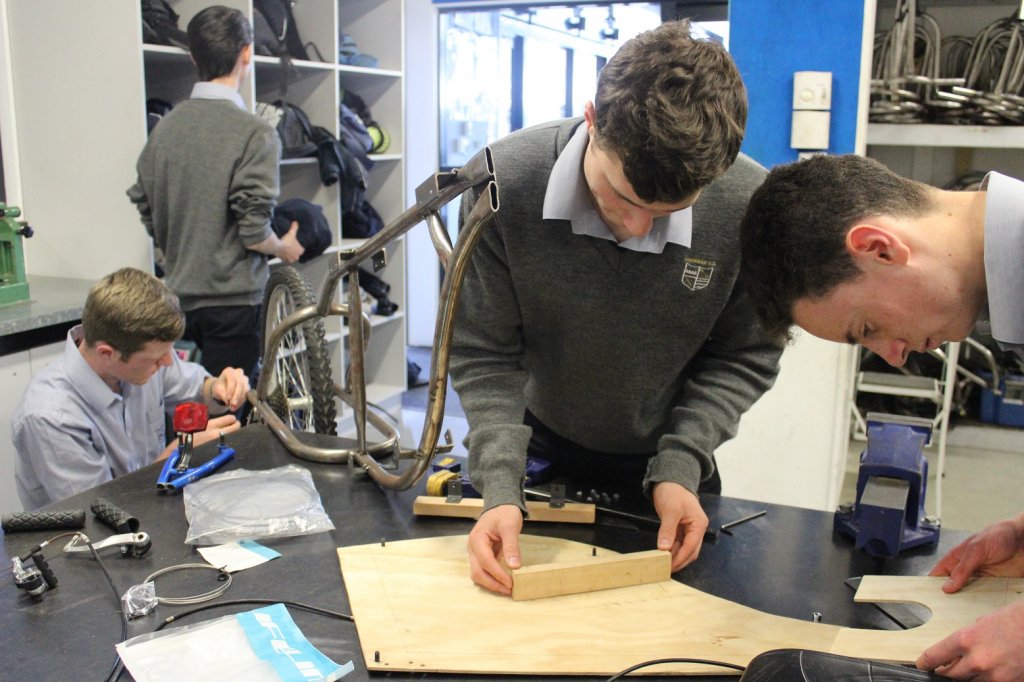 The three-man team of Sam Hogan, Sam Bain and Aaron Bruce said they chose a bike design for the simpler make and easier steering, which will help them in the Street Circuit phase where they have to make a few tight turns.

“There’s been a few hiccups but we’re getting there,” said Aaron Bruce.

“It’s really good learning from experience,” Sam Hogan added, “you learn things you may not be taught.”

James Ross, partnered with Matt Berry, said they expected their bike would do well in the friction test. “We’re hoping,” he said.

“Project managing is one thing I’ve learned,” James said of the experience, “there’s so many variables that come in. Learning how to attack things and find the best way to do it.

“Throughout the years we learn more and more but this is kind of the pinnacle of our materials technology (learning) at Cambridge High School.” Rhys Brunton (left) and Josh Hogan at work on their project.

All teams said they were looking forward to getting their projects completed and out on the track.

“I think it’s coming along, hopefully we’ll be done by race day,” said Rhys Brunton, who has the responsibility of racing his team’s bike in every phase of the competition due to partners Josh Hogan and Chris Stanson being unable to make it on race day. “I don’t actually mind to be honest,” he said, looking forward to racing the bike.

Despite not being able to see their bike perform on the day, Chris said working on the project had been a rather interesting experience. “It’s really cool to see it go from being a design on paper to a fully-built prototype,” he said. “You don’t get to the finished product like that in other subjects.”

“I’m looking forward to seeing everyone else’s projects, and racing,” said Davis Catchpole, who is making a three-wheel cart with Okoko Anaing and Liam Barnes. Davis Catchpole (standing) and Okoko Anaing with their project.

“It’s nice to see a variety of ideas too, they’re not all the same.”

Bruce said he wanted to encourage members of the public to go along and watch the regional final on September 29, being held at Kartsport Hamilton in Tamahere from around 10am. Entry is free, and there will be test rides available in electric vehicles from Tesla, BMW and others, as well as a Waikato Engineering Careers Association careers stand and hot food trucks. For more information check out evolocity.co.nz. Kian Mathieson works on his project with the help of teacher Bruce Siriett (right).