Local superbike rider Dillon Telford has completed the latest round of the Italian Superbike Championship series with a 22nd-place finish out of 43 riders – not bad when you’re up against the world’s best superbike riders with 24-horsepower superbikes and massive corporate sponsorship.

The do-it-yourself Kiwi is being supported by his girlfriend/mechanic Jo Taylor and the Gabro Racing team, going a long way on minimal sponsorship to show the big boys just how fast the “Fast Kiwi” can get.

For the latest round at Misano, Dillon and his grassroots team managed to upgrade their 2011 Aprilia Tuono V4 superbike from a 1000cc motor to 1100cc to match the power of their competitors, but when the new engine started randomly cutting out with no obvious cause, the week leading up to race day became rather stressful. 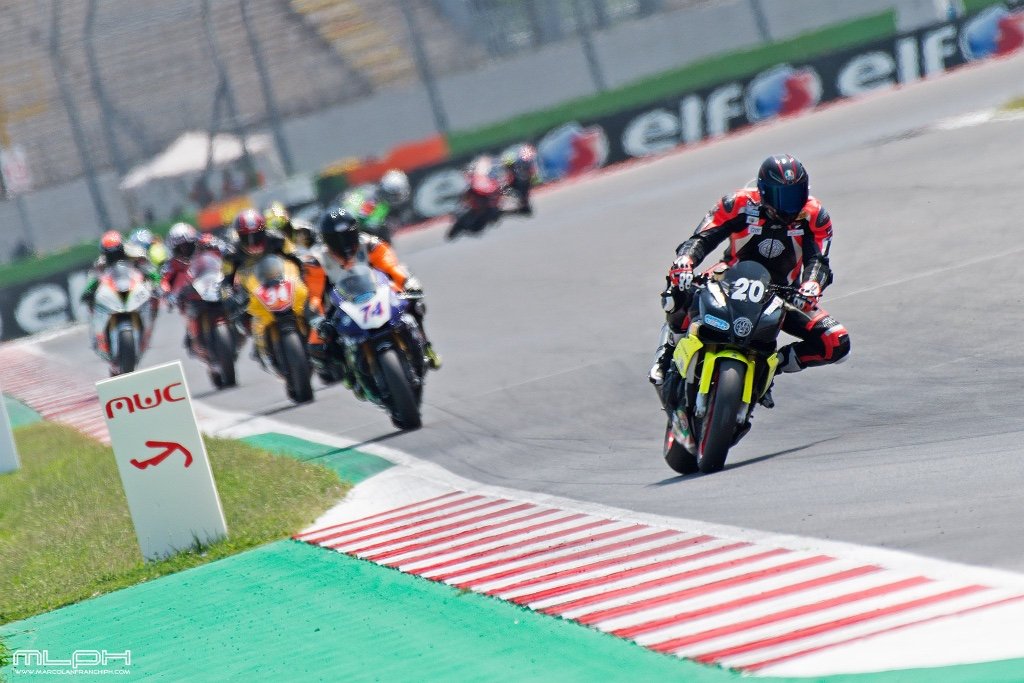 Dillon Telford finished 22nd out of 43 riders at the Misano World Circuit.

“The issue caused a very fast 6th gear crash at Vallelunga,” said Jo, “both bike and rider were extremely lucky to walk away unhurt or damaged, thanks to the fantastic gear from RST-Moto.

“Getting closer to the Misano World Circuit race, tensions were high. It’s a fast and unforgiving track, National Trophy 1000 is a fast 42 rider class and this is not the time or place to gamble with your life with a ‘she’ll be right attitude’, everyone was exhausted, stressed out and frustrated with no one or thing being the answer to our problem, only days out from the event.

“We took a gamble and un-plugged the map sensors on the bike, and voilah, she doesn’t stop!”

Race day at the Misano World Circuit came with the motor sorted just in time, and tensions were high amidst a highly talented field of riders pumping out top lap times of 1.36 – 1.37 seconds. But in the qualifying round Dillon managed to produce a personal-best time of 1.40.7, putting himself into a 23rd-place start position. “We didn’t obtain our personal goal of 1.39 but with a little more set up and time we can,” said Jo.

“Dillon got a lot of second looks from people on track as he passed them with handlebars at their head height!” Dillon Telford races around a bend.

With official racing underway, Dillon made his way into 20th place and then 17th, until a messed-up gear change saw him hit a corner in neutral, running wide and allowing a few riders back underneath him. He managed to pass a few of them before the checkered flag ended the race, leaving him in 22nd out of 43 riders.

“Not our ideal race, but … an awesome solid weekends’ performance after a hectic week,” said Jo. “The team is very happy, the bike ran okay with the map sensors unplugged … We brought the bike home in one piece, setting new personal best lap times and knowing we have the pace to be at the front of this championship if we had the financial support to do it, gaining the Gabro Tuono bikes’ best ever lap times and unofficially the fasted naked around Misano.

“This track takes big balls to ride, especially at the pace of the front runners, but we’re inching closer each time we ride.”

Later, a test day at Mugello (in 55-degree Celsius heat) enabled the team to retune the bike to run with the map sensors connected, without the cut-out issues, reaching a top speed of 294kph, a huge improvement over the 275kph top speed they’d achieved with the 1000cc motor.

The next and final race takes place this Sunday, August 26, before the Kiwi pair returns home a few days later. “We hope to make our pre-race preparation days less stressful this time around!” said Jo.