Swimmers come out on top 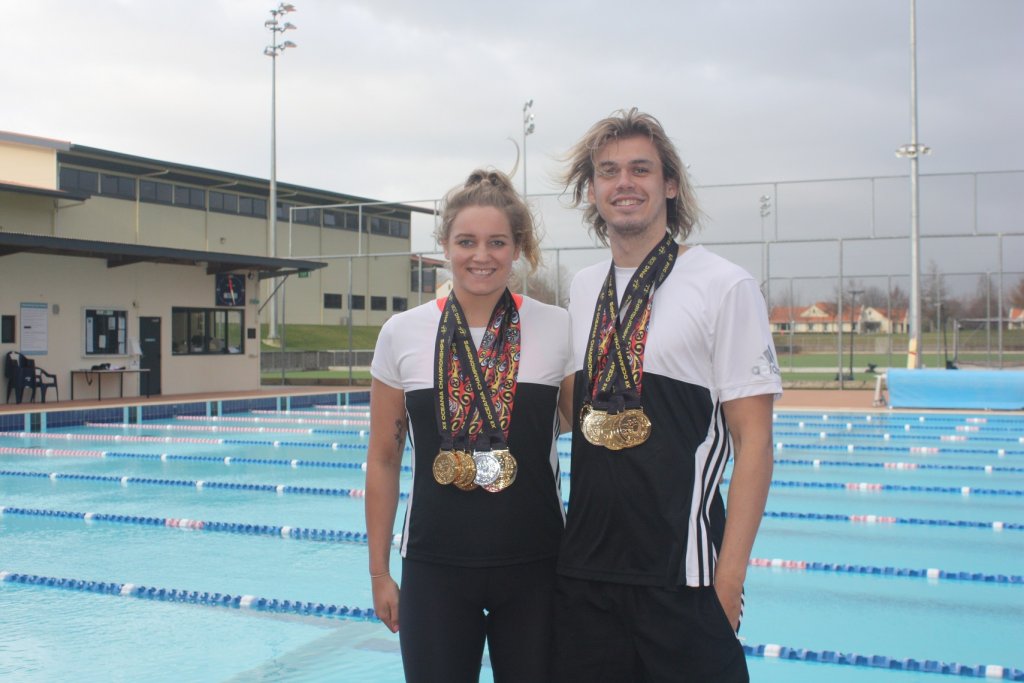 St Peter’s swimmers Paige Flynn and Daniel Caldwell have returned to Cambridge with a stack of medals.

The St Peter’s Swimming Club has good reason to consider itself one of the country’s best after finishing up 7th overall at the New Zealand Open Swimming Championships.

The event over July 2 – 6 saw 15 local swimmers compete in open-age racing across men’s, women’s and mixed divisions, competing against 46 clubs from around New Zealand. Vanessa Ouwehand racked up a stack of medals with a first-place finish in the 50m butterfly, first in the 100m butterfly and third in the 200m butterfly. She also joined Holly Isaac, Rylee Britton and Paige Flynn in the women’s relay team to earn bronze in the final.

“They were pretty good,” said club coach Carl Gordon. “Finishing 7th on the points table is pretty respectable for us and getting top Waikato club by quite some way.

“It has its own little challenges to it, it was hard for the three coming back from Papua New Guinea…”

Dan Caldwell, Paige Flynn and Thomas Raymond competed at the event having just taken part in the Oceania Swimming Championships in Port Moresby, Papua New Guinea, June 25 – 30. There, they dominated the field along with the 20-strong Kiwi team, New Zealand coming away as the top overall country.

Paige certainly pitched in toward the effort, collecting two golds, a silver and a bronze, as well as five relay medals. “I didn’t go in with many expectations… the team environment was just phenomenal, I enjoyed every second of it,” she said.

All three swimmers, aged 19 to 21, were representing the country for the first time. Paige’s gold medals were earned in the 50 and 100 metre back stroke finals, as well as silver in the 100m freestyle and bronze in the 50m freestyle.

The relay medals came with the NZ women’s team winning gold in the 4x100m medley, and silver in the 4x100m freestyle. In a mixed relay team along with Daniel, the Kiwis also won the 4x50m mixed, 40×100 free style and the 4x50m IM medley.

“We didn’t exactly have a lot to lose, so it was just go in there and race as hard as you can,” said Daniel, who also won gold in the 4x100m men’s freestyle relay, and gold in the men’s 50 metre freestyle, beating his two-year personal best (PB) in the process.

“It was good to finally smash that,” he smiled.

Thomas, who was absent at the club last week, finished up the event having made the B final of the men’s 200m freestyle race as well as a few PBs.

The trio will compete in the national long course champs October, continuing their rigorous training over the next three months after a brief but well-deserved week off. Meanwhile, a team of 26 St Peter’s Club swimmers were across the ditch this last week, competing in the South Australian Swim Champs.