Mighty 11 boys back from Aus

Joel Runciman and Josh Cavanagh are back in Cambridge after taking on Australia’s Mighty 11 team. Photo – Michael Jeans.

Cambridge’s Mighty 11 BMXers Joel Runciman and Josh Cavanagh have returned from their whirlwind trip to Australia with some fantastic racing experience under their belt. Though they didn’t bring home the trophy, they did manage to make a few top placings in their qualifying motos as well as a few new friends across the ditch.

Although the “Mighty” win went to the Aussies, the two Cambridge boys were the best of the New Zealand bunch with Josh finishing fourth in the team racing final – the fastest Kiwi – and Joel finishing fourth in the individuals final – the only Kiwi to make the final. They also pulled off a few first and second placings in the motos, but were eventually squeezed out of the front of the pack by their larger Australian competitors.

“It was different and unique, it’s good to have the opportunity to race with people,” said Josh.

“It was fun racing as a team, which you don’t get to do in normal racing,” Joel added. 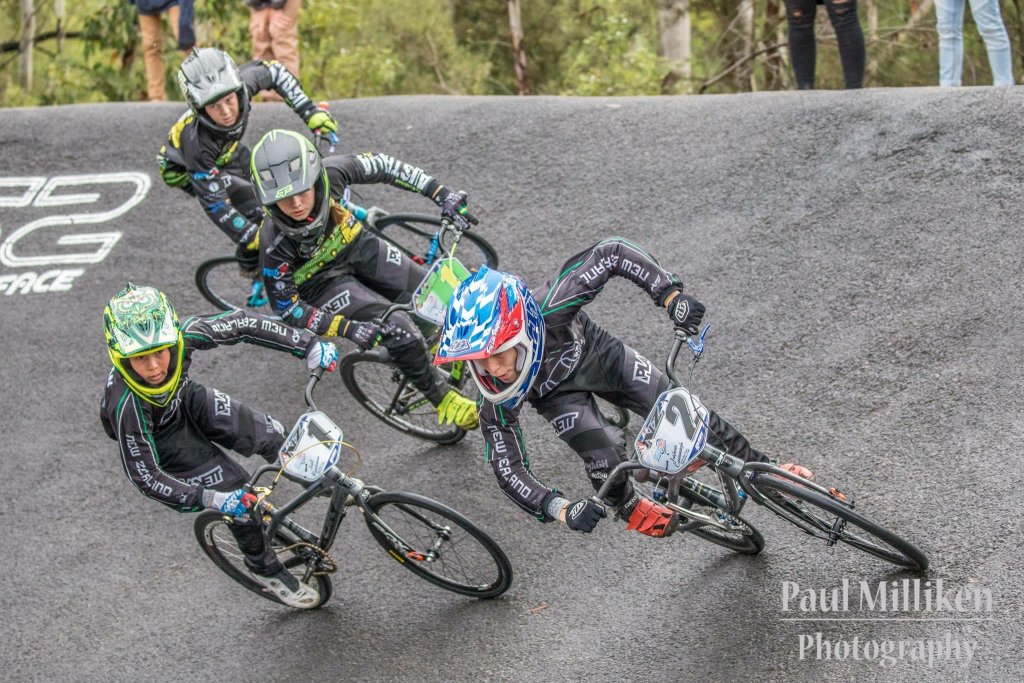 Josh Cavanagh at the front of the pack during one of the team racing rounds, with Joel Runciman (left) helping to push out the Aussies. Photo – Paul Milliken Photography.

It was a different experience for the boys working with a team instead of working for themselves, where usually they would try to knock out every other competitor, in this case they had to waicth out for their team mates and work together. “You’ve got to communicate with each other while you’re racing,” Josh explained.

“It’s quite different racing, they had to consider leaving gaps for their team mates, but also blocking the Aussies at the same time,” Joel’s dad Neil explained. “There’s some tactical stuff involved.”

“I was really proud of them, they did really well,” Josh’s mum Shelley added. “The Australians were so much bigger than our boys – I’m not sure what they were feeding them! But they stayed positive and they definitely rode their hardest and their best.”

As captain of the team, Joel led two haka performances at the competition in front of a crowd of hundreds, and performed it so well that they managed to freak out their competitors a bit. “That was fun,” said Joel said with a smile. The boys said their favourite part of the whole experience was all the “fun stuff” they got to do. “It was cool to see new animals and stuff,” said Joel, who had never left the country before. “And it was fun because I didn’t have any brothers or siblings to annoy me!”

Despite their parents being there to watch them race, the boys stayed with Australian families as part of a cultural exchange, and went and visited a few cool places along with their Australian competitors, like adventure parks, wildlife parks, skate parks and go-karting.

“It’s not only about the competition, but getting to know people and making new friends,” said Shelley.

“They (the homestay families) really treated them as if they had two extra sons for the week, and were so proud of them,” said Neil. “They turned up at the track and they were yelling for the Kiwis!”

Another Mighty 11 round will take place in September, where both countries will re-trial the Mighty 11 teams, and both Joel and Josh plan on re-entering. This time the Aussies will come to New Zealand, and the Kiwis will be aiming to take back the trophy.