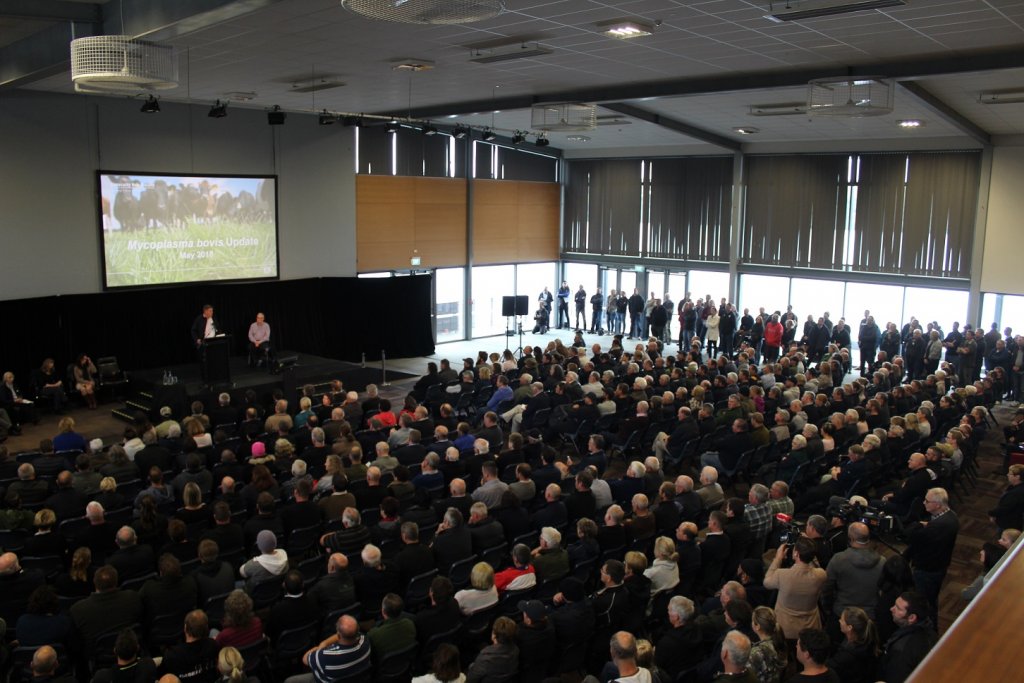 Around 700 people packing in to hear the Mycoplasma bovis meeting at the Don Rowlands Centre.

It was standing room only at Friday’s Mycoplasma bovis meeting at the Don Rowlands Centre, with around 700 people packing in to hear the latest on the outbreak that has now reached Cambridge.

Representatives from the Ministry of Primary Industries (MPI), Dairy NZ and the Rural Support Trust took it in turns to talk the audience through the details of the disease, including how to keep their farms safe from infection.

Roger Smith said the disease is believed to have arrived here in January 2016, but it is unclear how. Suspected carriers of the disease include imported semen or frozen embryos, imported feed, imported used farm equipment or veterinary medicines and biological products, imported live cattle or other imported live animals. It is not believed that live animal imports are the source, however, as the New Zealand outbreak has a different DNA sequence to Australia – our only source of live cow imports. The audience was reassured that other species of animals, such as horses, were not at risk of contracting the disease, and nor does it pose a risk to human health. Milk and meat from infected cows are still safe for human consumption. Farmer Henk Smit confirmed that the local M. bovis outbreak was centred around his Roto-o-Rangi farm.

The visiting officials addressed the crowd for almost an hour before the floor was opened for question time.

First at the microphone was farmer Henk Smit, who confirmed that the local M. bovis outbreak was centred around his Roto-o-Rangi farm. Notoriously difficult to diagnose, M. bovis arrived at Henk’s farm in around mid-2016, before anyone realised the disease was in the country. It wasn’t until late last year that South Island farmer Alfons Zeestraten phoned Henk to advise that cows at his Southland farm, where Henk had purchased cows from, had tested positive for M. bovis.

Henk had bought 240 heifers from Zeestraten, trucked them up from the South Island in June 2016 and put them onto three different farms – two owned by Henk and one by a third party. Of the three –Maungatautari, Roto-O-Rangi and a third property – only the Roto-O-Rangi farm is infected, after milk samples began returning a positive result four weeks ago. The other two farms are now restricted properties.

“Where this is going, I don’t know,” Henk said on Friday, “I think they will continue with eradication, in my opinion they won’t get it under control…it’s too far spread.”

On Monday, Prime Minister Jacinda Ardern advised that eradication had been chosen over containment of the disease, because New Zealand has “one shot” to get rid of Mycoplasma bovis for good.

Following Monday’s announcement that all cows on affected properties would be culled, Henk has reportedly said he will abandon farming altogether after 33 years in the industry.