The morning’s heavy rain last Monday held off for just a moment to allow the site blessing of the new Cambridge pool complex to get underway.

A rainbow suitably showed its colours as local iwi circled the old pool reciting “Ka Mate”, to begin the proceedings. Mayor Jim Mylchreest welcomed a gathering of over 50 people at the Cambridge Pool site, where demolition of the outdated facility would commence afterwards.

He thanked all those present, including major sponsors such as Perry Group, Trust Waikato, Waipa Networks and of course the Cambridge Lions, who made headlines last year when they donated $100,000 towards the project.

“It’s really a community effort, and I really want to thank all of the sponsors and supporters that we’ve had,” Mylchreest said. “Having the Lions Club make the announcement very early in this fundraising round of their contribution of a hundred thousand dollars was absolutely fantastic, and I believe probably the turning point in the community views of this project… Once that offer of that very generous donation came through, that was really a phenomenal lift to the fundraising group.” 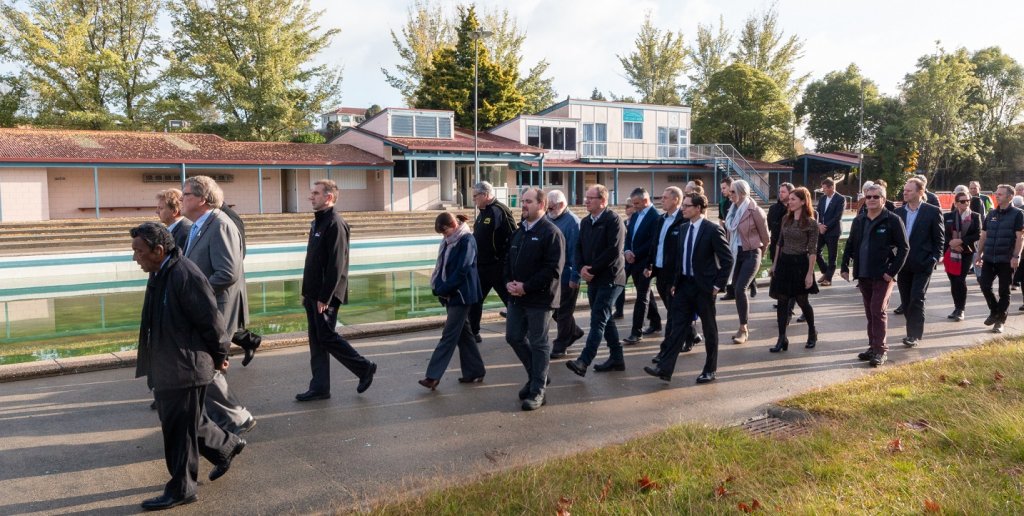 Those present circled the pool as part of the site blessing. Photo – Michael Jeans.

During the formalities Fred Hansen from the Cambridge Lions presented Mayor Mylchreest with a cheque for the remaining $50,000 of their $100,000 donation.

The Mayor acknowledged the project’s long journey to get to the point of demolition and construction, noting that anyone under 12 wouldn’t have been alive when original planning began.

“It’s a phenomenal facility that Cambridge will have, and certainly we look forward to it being completed,” he said.

Plans for the $16.6 million project include an upgrade of the existing outdoor pool, a new 10-lane indoor pool and learner’s pool, a hydrotherapy pool, spa and sauna and a children’s splash pad, as well as increased seating, a community room, car-parking, landscaping and an upgrade of Williamson St.