Always keen for a free trip, Claire Castle hopped on the bus for a look around Cambridge and surrounds on the first council Discovery Tour over this side of Waipa.

I was excited to learn more about the history of our part of the world, and I wasn’t disappointed. The tour leader was Tony Roxbourough, Waipa District Council’s Manager – Waipa Heritage and Museum, who invited input from others on the bus. “I need to get knowledge of Cambridge, as I’ve been more Te Awamutu-focused,” he admitted, adding that “the stories around the facts are as important as the facts” as he encouraged those on board to share their stories. 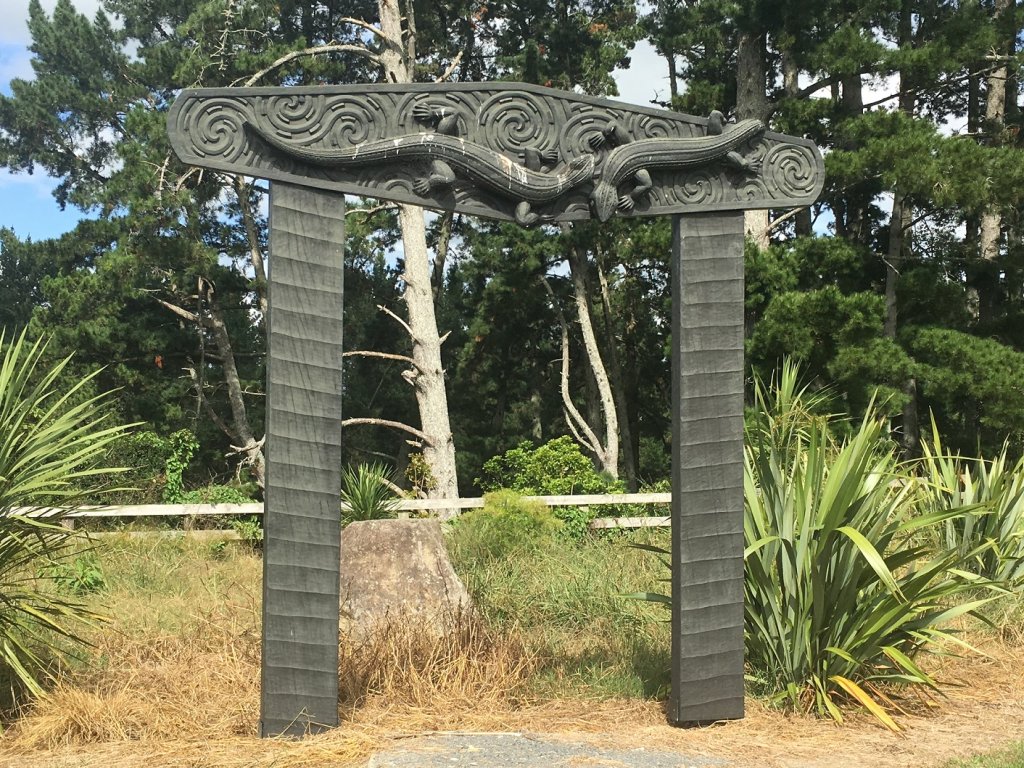 Kooiwi (human bones) which were discovered during construction of the expressway were buried at Puna Roimata – ‘spring of tears’ – at the end of Athlone Place.

Starting off from the Cambridge Town Hall, our first stop was Te Puna o te Roimata – the Urupa at the end of Athlone Place off Thornton Rd.

On hand to assist was local iwi member Harry Wilson, who was able to help with Māori history in particular.  Harry formally welcomed us onto the site, going on to explain how the Waikato Expressway had actually been helpful for the archaeological understanding of the area, as carving through the land had opened it up for exploration. He also explained the giant nui (ceremonial pole) – Te Rongopai –  visible from the Expressway, with arms outstretched. Harry explained that the mast represented a direct connection to God, with arms to welcome everyone. This niu (ceremonial pole), Te Rongopai (the message of peace) was erected in acknowledgement of the many pā located along the gully where the expressway runs. The outstretched arms reach out to share karakia to the people of the four winds.

After an interesting talk from Harry with input from Tony, it was back on the bus and off to Pukerimu then on to Monavale and Roto-o-Rangi, where we heard all about the early colonial troops in the area and what happened there.

From there, we cruised out to Lake Karapiro where we heard about the Māori history of the area, including an inter-tribal battle that resulted in mass casualties.  Harry said the bodies were burned where the lake is now, and the ensuing foul-smelling smoke went all the way over to Hautapu, which Harry said is how that area got its name.

And Karapiro was named because of the putrid smell (piro) from the bodies on the rock (kara) where the lake now sits.

Then it was back on the bus and up to the top of Pukemako – commonly known as Maungakawa or Sanitorium Hill in reference the open-air TB sanitorium built on the site – disembarking in the Gudex reserve at the top.  Then back through Fencourt, finishing the tour back at the Town Hall.

The whole thing was thoroughly interesting, and I can report that I learned a lot. They will need to shorten it down however, as the whole thing took almost four hours – an hour longer than scheduled. Oh, and we got cotton shopping-style ‘goody bags’ with the draft 10-year plan, a bottle of water and some popcorn.  Bonus.

The trips are booking up fast, and by the time this goes to print they might all be booked up but do keep an eye out for future trips to discover more about our town and its surrounds.