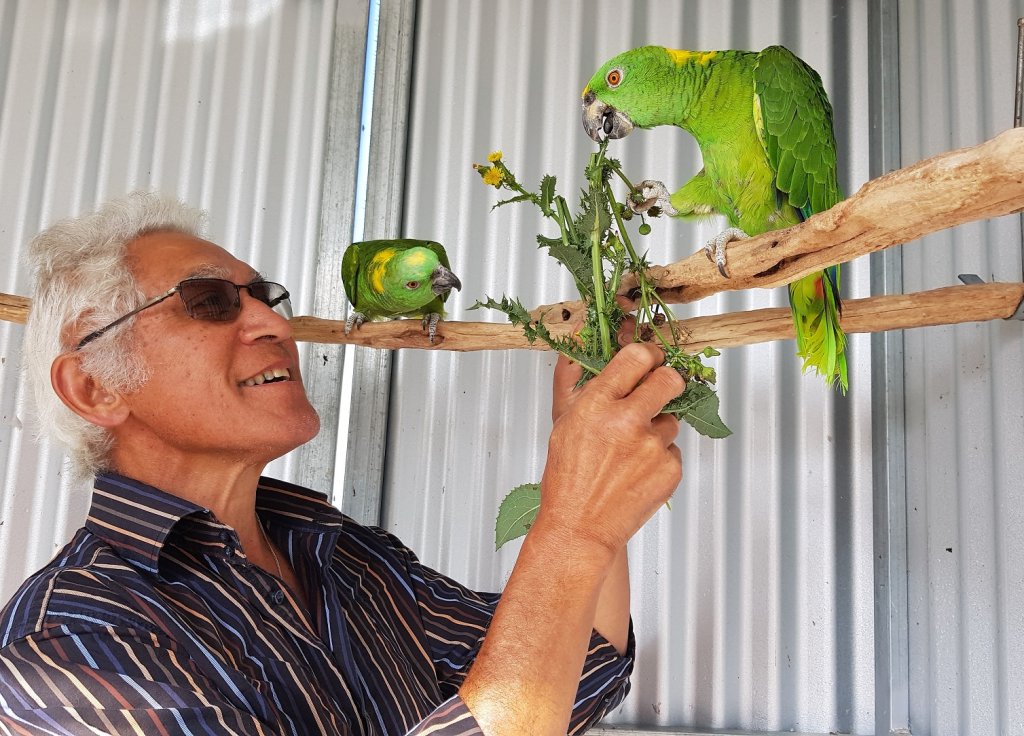 Cambridge’s Wayne Morris and his te reo Māori-speaking parrots come as a delightful surprise to those who hear them communicating – their mastery of imitation has amazed many.

The much-loved Amazon parrots have been heard whistling several bars of Pōkarekare Ana.  Their phrases include “ata mārie (good morning)”, and they have made valiant attempts at “pō mārie (good night) – although word has it that the ‘p’ isn’t something parrots can pronounce with ease, and Wayne’s little Māia struggled with the best of them to work her tiny tongue around that prickly consonant.

Wayne’s success in teaching the birds te reo phrases validates his belief that the best way for anyone to start learning the language is verbally, rather than via the written page. “I have come to realise that people have trouble learning te reo mainly because they read it. If you really want to learn it, you must listen to it; treat the written word merely as a reference.”

It’s a theory he puts into action at Ngā Hau e Whā Community Marae in Cambridge, where he helps Vinnie and Chrissy Simmonds deliver introductory te reo Māori language courses, one of which is currently underway.

And while working as a corrections officer at Waikeria Prison, Wayne showcased his feathered friends to inmates at the facility’s Te Ao Marama (Māori Focus) Unit during Māori Language Week 2016.

“The guys were thrilled when they heard the birds speak in te reo.”

Wayne has loved animals and birds all his life.  Passing on te reo Māori to the parrots happened more by accident than design several years ago when his partner Judy Formby juggled space at their Cambridge home to accommodate her long-held love of parrots and her growing fascination with Maine Coon cats.

“Part of my role as helper was to look after the parrots. Then about three years ago, Judy obtained a special line of the Amazon parrots. We hand-reared the bird but she still required supervision – that was Māia,” he said.

“When I talked to her, I noticed her throat wobbling and her beak moving – you could see she was trying to copy what she was hearing. That’s when I started making a determined effort to teach her. I’d say “kia ora e hoa (hello mate), kei te pēwhea koe (how are you)?”, often from the other room, and she’d repeat it. She also learned “ko Māia tōku ingoa (my name is Māia)”.

“Then we got to the stage when she went out to the aviary to join a male who was to be her mate. She taught him, so I expanded their repertoire. They are such copy cats, and now all claim that their name is Māia!”