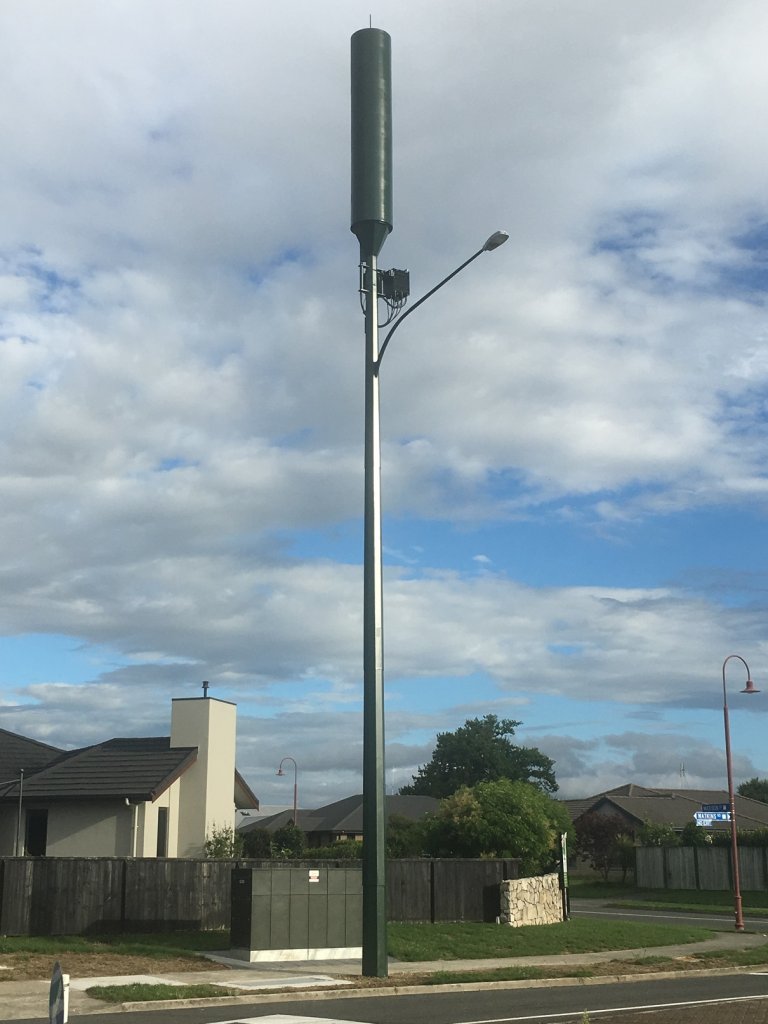 The Spark cell phone tower on the corner of Madison St and Watkins Rd has now been painted green.

The Spark cell phone tower erected late November on the corner of Madison St and Watkins Rd has had a cosmetic improvement in recent weeks, now sporting green paint, but Spark says it won’t budge when it comes to moving the tower.

Waipa District Council reported having “constructive and positive” discussions with Spark in December regarding its location, suggesting six alternative sites for the tower – five adjacent to the Waikato Expressway, and one on the Robinson St road reserve on the greenbelt between Taylor St and Watkins Rd. They were due to meet with Spark late last month for further discussion.

“Spark representatives have advised council staff that they will not be relocating the Watkins Rd cell phone mast,” a council spokesperson confirmed last week. “Despite council staff providing alternative sites, these sites were discounted by Spark in favour of the existing Watkins Rd site due to operational and financial reasons.

“It is beyond council’s control. Council has advocated strongly for the tower to be moved but cannot do anything else.”

The Watkins Rd tower has been operational since January 24, now painted a shade of green similar to the street lamps in the area. Residents in Cambridge East have said they are not taking the matter “lying down”. Roy Shepherd, who lives a few houses down from the tower, recently voiced his concerns to Spark with no avail. “Spark has said ‘nobody’s broken any laws’, but the process is badly flawed, it’s like putting a dummy on a bottle of vodka for a baby, totally inappropriate,” he said.

Another resident in Cambridge East, Danny Burt, reported having reception issues with his television’s UHF aerial since January 24. He initially contacted Freeview, who couldn’t find any issue on their end and advised him to try Radio Spectrum NZ.

A representative from the company met with Burt at his home this week, ran a few tests and found the interference was external, confirming that the Spark tower was the cause of the issue.

“The Radio Spectrum representative advised me that Spark did have a duty of care here and that they really should meet the costs of correcting the issue,” said Burt. “He also advised me from a certain date that all new house builds are required to have these 4G filters installed on aerials.”

Burt contacted Spark regarding the issue, describing the communications as “a little frustrating”. He is currently awaiting a reply. “I have informed them that I am not the only person and that we won’t go away,” said Burt.