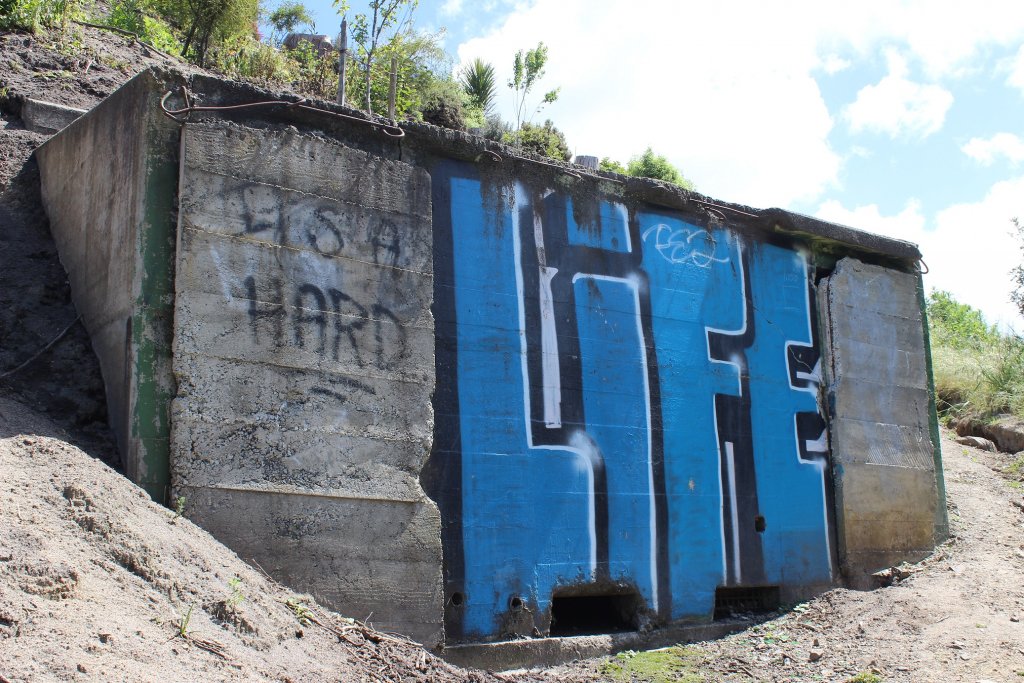 The WW2 fuel bunker remains at Lake Te Ko Utu are scheduled for an upgrade.

The World War 2 fuel bunker remains hiding in the hill at Te Ko Utu Lake are scheduled for an upgrade over the coming months.

At their November meeting the Cambridge Community Board (CCB) approved up to $1000 for the fuel bunker project, which plans to improve the historic site.

Known as Aviation Reserve No.9, the fuel bunker was originally built by the NZ Defence Force in 1942 to store fuel for the Air Force station at Rukuhia, now the Hamilton Airport, holding up to 2.27 million litres of fuel. Its convenient location meant it could be loaded with fuel from the former train tracks, remain hidden by the bush from aerial view, and supply tanker trucks at the pumping station down below, near what is now the car park.

The tank was emptied in July 1946 and removed in 1950. Left today are the concrete pump house and the tunnelling that led to the bunker, now covered with the familiar graffiti-laden concrete wall. Though it was sealed shut in the 1970s, some Cambridge residents have recalled playing in the tunnel as children.

CCB Chairman Mike Pettit confirmed the restoration project is in progress and they expect it to be completed by early March 2018. The new developments will include repairing the track above the Te Ko Utu carpark, where the tunnel entrance resides, and clearing the sluice drain below of foliage and dirt – both jobs to be carried out by Waipa District Council Parks staff. Another aspect of the project will involve putting up information signs which explain the history of the site.

Discussions around the project have also included the possibility of installing a solar-powered light to illuminate the interior, which would require additional funding.

C&R Developments are constructing gates for the fuel bunker as a donation to the community.

Cambridge local Dave Homewood, who has spent many years researching Cambridge’s connections to World War 1 and 2, has provided a huge amount of assistance to CCB member Julie Epps in collating information for the story boards.

Those interested in contributing towards the project can get in touch with the Cambridge Community Board by emailing [email protected] or phone the council on 07 823 3800.