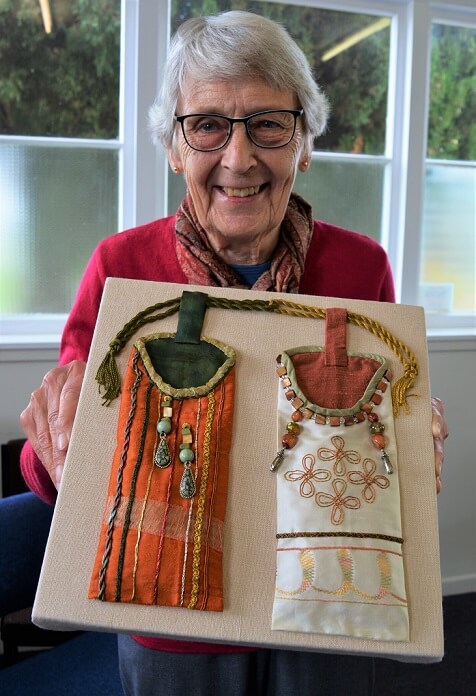 Toni Eames with the two embroidered medieval Anglo-Saxon pouches she will have on display at the Hamilton exhibition. In the absence of pockets incorporated into clothing, people of the era attached these decorated pouches to their belts.

The three are members of the Waikato Guild and number among around 19 locals whose expertise with a needle and thread will be on show in Hamilton this month.

The exhibition will feature a collection of work from the past two years, including a display of quilts made for the Waikato Hospital’s new-born unit.

There will also be a 2018 calendar showcasing embroidery – which includes input from Cambridge members – as well as three raffles of pieces of hand embroidery produced by various Guild members.

Despite this seemingly an age of instant gratification, embroidery in its many forms is gathering fans in growing numbers in some parts of the world.

America and the United Kingdom are currently enjoying a great resurgence in the craft, membership in the almost 60 guilds and numerous stitching groups in New Zealand remains steady.

With today’s ready access to information, those with an interest in it can easily research the various types of embroidery, learning how it has been done through the centuries by the different peoples around the world and viewing images of their work.

Some of those styles date back to several centuries BC.  Early examples of embroidery have been found in many parts of the world, including China and Scandinavia. Embroidery from Europe, the Far and Middle East and in the medieval Islamic world was variously linked to royalty, the church, and those with status and wealth. By mastering the art, many young women of their day were granted enhanced standing within their communities.

Cambridge women have long been engaged in sewing. In the latter part of the last century, they banded together into a group which was linked initially to the Waikato Embroiderers Guild and then went on to form the Cambridge Embroidery Group.  Members continue to meet on the first and third Thursday of each month at the St Andrew’s Church hall, and are always open to welcoming newcomers.

The upcoming exhibition by the Waikato Embroiderers Guild will run between 10am and 4pm from Thursday to Sunday, October 12-15, at Hamilton’s Creative Waikato Gallery, 131 Alexander Street.