Hon. Louise Upston’s Friendly Forum last week gave some promising insight into the positive happenings around the country and within the district. The hour-long chat with the local MP, held at the Cambridge Health and Community Centre on Friday, covered a range of topics, from low unemployment and job growth through to the reduction of national debt.

Hon. Upston commended the efforts of Cambridge locals in gaining two new police officers for our town. “Law and order has clearly been an issue locally,” Upston said, “so Cambridge has secured two additional police officers from this financial year, from the announcement earlier in the year of the 1125 new police staff. Some of those will be rolled out in year 4, but Cambridge secured them from year 1, which I think was really positive. That was very much based on the community expressing concerns, and that’s been responded to in a very short period of time which is great.”

Hon. Upston also talked about other areas that the budget has been invested in which benefit our local district, including $9M committed to Cambridge High School and $1M for Cambridge East School. “So we’re definitely seeing our fair share, and there’s also work going on at Cambridge Middle School,” Upston said. “I think one of the challenges we’ve got to face as a community is one of growth, which is a great problem to have, but I do think we’re going to have to confront what that growth means, how big we grow as a community, and then making sure that in terms of infrastructure like schools, we keep up with that. So one of the discussions a while ago was: is the age configuration right between the middle school and the high school, do we need to look at changes to that – and those are all conversations for the community to have, before those involved in the Ministry for Education for example make decisions on it.”

Another local benefit of the Budget’s big infrastructure spend is the improvement of our local roads. Hon. Upston touched on the recently announced plans to extend the Waikato Expressway through to Piarere, “That takes out some really significant intersections that have caused lots of us grief for many, many years,” she explained. “The T intersection of SH1 and SH29, the Tauranga turnoff, will be taken out, which will be really great. The other intersections that are affected are… the Fergusson Gully road intersection – although that’s only a small road it’s a fairly horrendous one, the Karapiro Road intersection where Karapiro School and the Mobil Station meet SH1, as well as Hydro Road…  we’ve got some beautiful reserves and entrances to the lake, but I’ve seen some fairly horrendous instances with people towing boats trying to cross over to get into those areas.

“The intention for that is that it’s construction ready by 2020, and they are really fast tracking it. The board is due to consider it this month, and then by the end of the year they’ll have more detailed information for people who are affected along that area.” 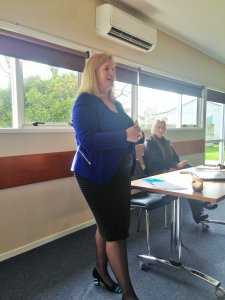 Hon. Upston fielded questions from the public towards the end of the meeting

Question time saw a few residents express their concern over the state of housing in New Zealand, as well as concern over Chinese buying land. Hon. Upston explained that “the bar is very high” for foreign buyers trying to purchase significant amounts of land. When asked of New Zealand’s stance on refugees entering the country, Upston explained that currently 750 refugees are permitted entry into the country per year.

With election year upon us, one question put to the local MP was, what is National’s message to voters? Hon. Upston explained that while most political parties were due to deliver their election promises in the 5 week period after the House lifts, she noted, “I guess the high level message is really that we’ve had a period of very challenging economic times, and it’s through the hard work of New Zealanders and business owners that we’ve got through it, and so now it’s about giving back, making sure people keep more of what they earn – continuing to put more investment into the things that you’re interested in, whether it’s education, health, law and order – but actually making sure that the tax burden isn’t any greater on those that are keeping the country afloat.”